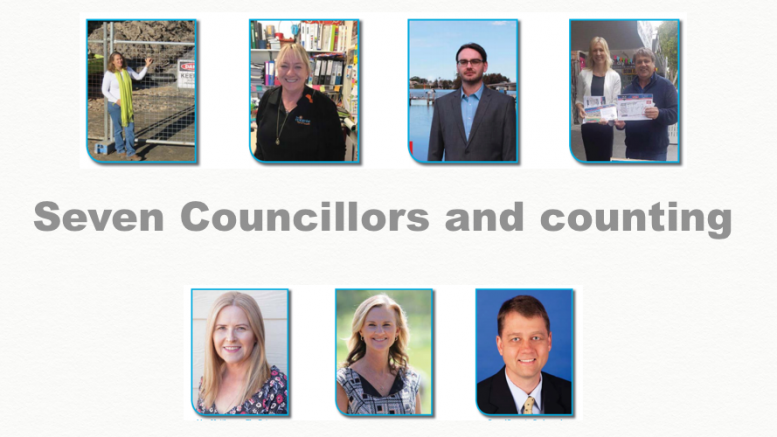 The newly-elected Central Coast Council was progressively taking shape as the Wyong Regional Chronicle went to press on Monday, September 11.

The Entrance Ward was the fi rst to have all three candidates decided from the fi rst preference count. Former Wyong Labor Councillor, Ms Lisa Matthews, has been returned. She’ll be joined by the Liberal Party’s, Ms Jilly Pilon. U n g r o u p e d Independent, Mr Bruce McLachlan, was the surprise third place getter in The Entrance Ward. Clear winners from the fi rst preference vote in the Wyong Ward were independent, Ms Louise Greenaway, and Labor’s number 1 candidate, Mr Kyle MacGregor. Based on quotas, as at 11:00am on Monday, September 11, Liberal candidate and former Gosford Councillor, Mr Chris Burke, appeared to be the most likely candidate the fi ll the third seat in Wyong Ward. However, it remained within the realms of possibility that former Wyong Councillor, Mr Doug Eaton, could be elected based on Save Tuggerah Lakes preferences. Another possibility would be that the second New Independents candidate, Mr Laurie Eyes, could be elected in the Wyong Ward. Budgewoi Ward will have two Labor councillors. Former Wyong Councillor, Mr Doug Vincent, has been returned, and his running mate, Ms Jillian Hogan, has also received a quota from first preferences.

A preference swap between independent former Wyong Councillor and Mayor, Mr Greg Best and the Save Tuggerah Lakes team, may result in Mr Best being returned. However, at the time this story went to press, Liberal Party candidate, Mr Garry Whitaker, was marginally ahead on first preference votes. Overall, independent candidates were the clear winners in the Central Coast Council election on September 9. Across all five wards, and with 55 to 60 per cent of votes counted, they had attained 31.5 per cent of the first preference vote, a swing of 1.8 per cent. Labor were also celebrating their results, gaining a swing of 7.3 per cent across the five wards. The inventors of the amalgamated Central Coast Council, the Liberal Party, were the losers, with a corresponding 7.3 swing against their candidates across all wards. The Greens and Save Tuggerah Lakes also suffered a small, across the board swing against their candidates. A detailed report on the results of the Gosford West and Gosford East Wards will be published in Monday’s Peninsula News and in Coast Community News on the following Thursday.

Wyong Regional Chronicle contacted all successful candidates in The Entrance, Budgewoi and Wyong Wards on Monday morning. Mr Kyle MacGregor, Labor Councillor-elect for the Wyong Ward was the fi rst to respond. Mr MacGregor, 28, is a casual high school teacher trained in History and Global Studies. “I think we’ve got a reasonably good chance of having a good group of Labor and independents working together to go through the workings of the former councils and working towards reinstating democratic processes,” Mr MacGregor said. “There needs to be a really good forensic inquiry into the fi nances as well as the governance of both former councils, because if you put the two together, you will be able to join all the dots,” he said. “I think we need to have a completely different direction. “I have lived here my entire life and people are annoyed with the Council because they don’t do anything for them.

“They hear about millions of dollars being spent on vanity projects, but they don’t have kerb and guttering.” Labor Councillor-elect in the Budgewoi Ward, Mr Doug Vincent, said: “It’s a good result and I am honoured that the community has put its trust in us, and I will be working very hard to advocate on the community’s behalf in the new council.” He said he expected the new council to be “more balanced” than the former Wyong Council. “Of course I am looking forward to a new Council that will put the rate payers fi rst and listen to the community,” Mr Vincent said. That will be a matter for the incoming council to decide. In terms of the issues that Mr Vincent would be eager to see the new Council tackle during the next three years: “The main thing is improving the roads, shared pathway linkages, and looking at the kerb and guttering situation around the areas. “These are some of the priorities that I will be taking to the new council for them to focus on and hopefully work together on.” Another is to improve disability or all-user access across the region. Mr Vincent is a qualified electrician who also has an associate diploma in electrical engineering, a Bachelor of Business and a Masters in Management. Wyong Ward’s Independent Councillor elect, Ms Louise Greenaway, said she attributed her success to her hard-working team members and volunteers. “They are people with really good reputations in the community, and their reputations attracted people from right across the Ward,” Ms Greenaway said.

“Some people have already said to me that the new Council should only look forward, and I am certainly looking to the future, but we have been left, in my mind, a very bag legacy, and I would like to look at some of the issues that have been a concern to the community for a very long time. “I think that looking back to those sorts of issues is a positive thing, because it will expose what has gone on and better establish the way this new council wants to operate,” she said. Ms Greenaway said her agenda for the future would include: “Creating a very positive and consultative culture within council, and reinstating two way communication between council and the community. “We need to know what money has been spent and what money has been allocated, so we know what money we have going forward,” she said. Labor Councillor-elect in The Entrance Ward, Ms Lisa Matthews, also thanked her “exceptional team” for getting her reelected.

“We were all former Wyong Council staff and, in my last term of Council, I think a lot of people were aware of my plight and the diffi culties I had with other Councillors’ behaviour, and I think people were more prepared to support me this time to stay strong and stay true,” Ms Matthews said. “I think women want women to vote for,” she said. In response to the swings against the Liberal Party and STL, Ms Matthews said: “Thank goodness, finally, common sense has prevailed. “I think the residents have done their homework and not just taken status for granted. “We have to move forward, and it is clear that what they received in the last term of Council wasn’t what they wanted, and I think they did their research. Liberal Councillor-elect for The Entrance, Ms Jilly Pilon, aged 47, said she believed being part of a strong, united Liberal team contributed to her victory. “The community understands I am looking to make a positive difference,” Ms Pilon said. “The fact we are not looking to change traditional Australian values such as Australia Day, also resonated with many voters. “Our priorities as Councillors moving forward must be to work on uniting the Central Coast region as one. “We will provide a collaborative approach with the community. “I will advocate for our fair share of funding to protect and provide local infrastructure and services. “ Ms Pilon said she believed there was definitely a need to deal with areas of mismanagement from both previous councils.

Labor Councillor-elect in The Entrance Ward, Ms Lisa Matthews, also thanked her “exceptional team” for getting her reelected. “We were all former Wyong Council staff and, in my last term of Council, I think a lot of people were aware of my plight and the diffi culties I had with other Councillors’ behaviour, and I think people were more prepared to support me this time to stay strong and stay true,” Ms Matthews said. “I think women want women to vote for,” she said. In response to the swings against the Liberal Party and STL, Ms Matthews said: “Finally, common sense has prevailed. “I think the residents have done their homework. “We have to move forward, and it is clear that what they received in the last term of Council wasn’t what they wanted. “I think the first thing is to get an update on where this amalgamation is up to and how much has been spent. “We need to look into the way the business has been operating over the last 16 months without Councillors, and I think we have to start building a relationship with the community, we lost that. “Clearly the community told us on the weekend, by who they elected, that things weren’t right, and they wanted to see change and progression,.”