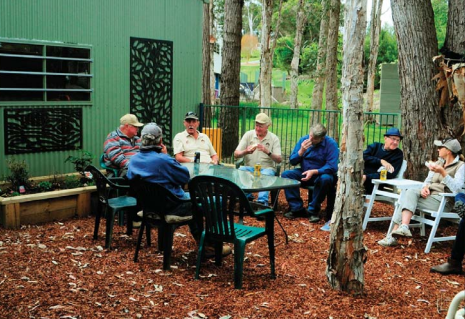 T he Erina Community Men’s Shed will be celebrating Men’s Shed Week, with a trivia night on Saturday, September 30.

President, Mr Bob Miller, said the Erina Community Men’s Shed was founded in January 2014. “It was , George Grant, who was a member of the Erina Community Baptist Church, who asked to start it on the premises,” Mr Miller said. “The church had a small maintenance shed they let us start in, but unfortunately George passed away six months after we started meetings,” he said. “We’re still there, but we’ve got two sheds and a lot of gardening going on. “We added to the original shed twice and purchased another one.” The Erina Community Men’s shed has 42 financial members and a few that just come for morning tea. “The biggest thing is woodworking, and a lot of guys like to get involved and hone their own skills.

“They also get involved in community projects, and the latest is a big project at Green Point Community Centre where they have built an outdoor garden” There are now over 12 Men’s Sheds on the Central Coast and over 1,000 in Australia. The movement has spread to Ireland and they are starting in New Zealand. Mr Miller said he believed it would become an international movement. “It is a place where men can open up and talk, to chat to a mate and have other people around them. The trivia night on Saturday, September 30, at Erina Leagues Club, will be a combined fund raiser for the Erina Community Men’s Shed and the NSW Wheelchair Sports Association. The Australian Men’s Shed Association officially launched 2017 Men’s Shed Week in partnership with the Bipartisan Friendship Group of Men’s Sheds, at Parliament House in Canberra.