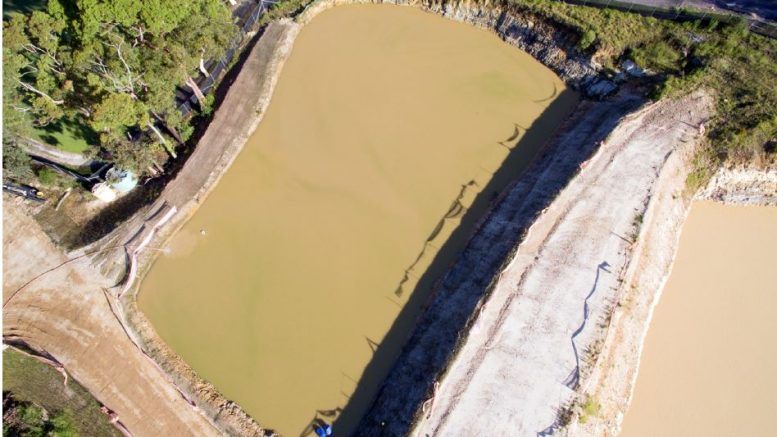 One of the leachate holding pits at the landfill, Mountain Districts Association contend water was leaking from a pipe onto the golf course

Issues raised in the ABC 4 Corners report that highlighted illegal dumping at Spencer and mismanagement of the Mangrove Mountain landfill have been referred to the NSW Independent Commission Against Corruption (ICAC).
An EPA media statement issued on August 9 said the program had “raised significant issues and included an interview with EPA Executive Director for Waste and Resource Recovery, Mr Stephen Beaman.
Chair and CEO of the NSW Environment Protection Authority, Mr Barry Buffier, said he had considered the ABC TV 4 Corners program.
“The Four Corners program contained allegations about corruption in the waste industry and suggested, or implied, corrupt conduct through inaction by the EPA in response to notifications of illegal waste activities,” Mr Buffier said.
“Consequently, I have referred this matter to ICAC today,” he said.
“The EPA has the toughest waste regulations in the country and puts significant effort into regulating the waste industry, monitoring compliance and taking enforcement action, and that work will continue,” Mr Buffier claimed.
“Mr Beaman will be taking four weeks recreation leave, effective today,” he said.