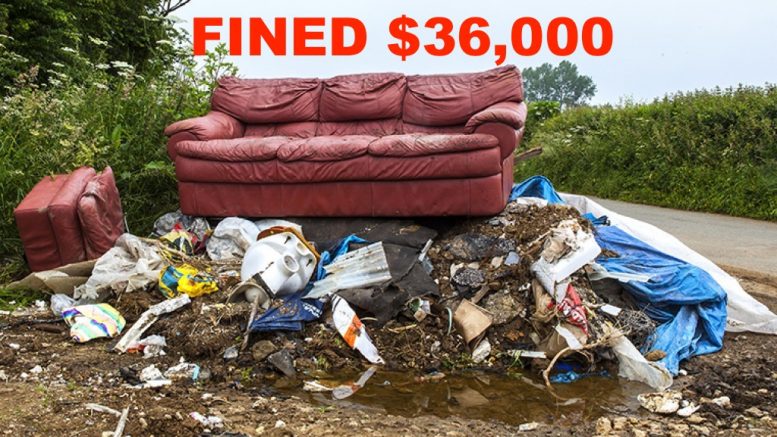 Central Coast Council has fined the driver and company responsible for dumping 70 tonnes of illegal waste on Sparks Rd, Warnervale.

The incident, investigated on behalf of Council by the Central Coast Regional Illegal Dumping (RID) Squad, resulted in fi nes and recovery of clean-up costs of $36,000 for the illegally dumped building and demolition waste that originated from a Sydney skip bin company. Council Group Leader, Environment and Planning, Mr Scott Cox, said it was a great outcome for Council and the community and re-enforced the important role of the RID Squad in identifying and investigating instances of illegal dumping. “Illegal dumping is a crime and Council is proactively seeking out illegal dumpers and taking the appropriate action to fine or prosecute them where required,” Mr Cox said.

“In this instance, the outcome is a result of community reporting combined with over six months of intensive investigation involving interviews and evidence gathering to identify the key perpetrators. “Council was able to identify and fi ne an interstate waste disposal company and the driver involved, issuing $12,000 in fines and recovering $24,000 in clean-up costs. If the perpetrators had disposed of the waste in accordance with EPA standards, it would have cost them less than $20,000. “This clearly shows it does not pay to illegally dump on the Central Coast.”

The RID Squad is a joint program between the NSW EPA and local Councils. The team is made up of highly-experienced investigators who follow up on reports of illegal dumping with a view to identifying, and where appropriate, prosecuting those responsible. On-the-spot fines for illegal dumping start at $2,000 for individuals and $4,000 for companies. Court action for serious offences can result in fines of up to $250,000 for individuals and $1 million for companies. “Council takes illegal dumping very seriously,” Mr Cox said. “We encourage the community to be proactive and report suspicious activity involving dumping of waste or the incidence of private landfill.”