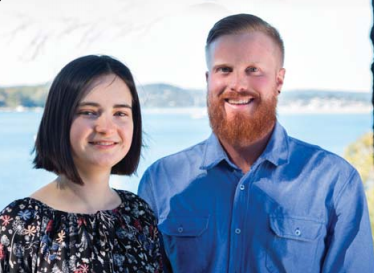 Two of the youngest candidates for the upcoming Central Coast Council elections are keen for the future of young people to be well represented on the new Council, and will be standing with New Independent teams.

Mr Mitchell Lawler, from Avoca, and Ms Ferran Thornycroft, from Point Clare, are both putting themselves forward as the second candidates on Independent teams for Gosford East Ward and Gosford West Wards respectively. Mr Lawler is a 26-year-old electrician who grew up in Avoca Beach and now lives in Kincumber. He attended St Edwards Christian Brothers College at East Gosford, where he was involved in many community and social justice programs. Mr Lawler plays an active role in his local community, including being a member of Avoca Beach Rugby Club, where he played for many years, a volunteer with MacMasters Beach Rural Fire Service, and previously a volunteer lifesaver with Avoca Beach Surf Club.

“I am concerned about the rapid changes that are happening within our local area and what kind of place Council is leaving for future generations. “Young people need to have a voice on Council, to ensure that there are increased opportunities that will keep young people working and living locally,” Mr Lawler said. At age 18, Ms Thornycroft has lived on the Coast since she was a year old. Having completed a diploma at Hunter TAFE in 2015, she now commutes to Sydney University.