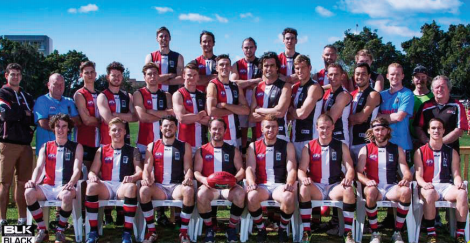 In the Black Diamond Cup semi-finals at Dick Burwell Oval on Saturday, August 19, minor premiers Terrigal Avoca produced a disciplined and powerful performance to overwhelm Cardiff in a thrilling, pulsating sudden-death First Semi Final.
Mark Skuse’s Terrigal Avoca booked direct qualification to the Grand Final with a thoroughly convincing 46-point win over Cardiff.
In a match played in blustery conditions, the Panthers defeated Cardiff 17.8.110 to 9.10.64.
The Panthers got off to the perfect start, kicking the first three goals of the game within 12 minutes, on their way to a 17 point first quarter lead.
They continued their dominance in the second quarter, using long kicking to their advantage, however two late goals to Cardiff saw the margin at 27 points at the long break.
Cardiff needed early goals in the third quarter, however it was Jayson Van Dam who got the first goal for the Panthers.
The Hawks responded with consecutive long goals to reduce the margin to 21 points and their supporters found their voice.
As class teams do, Terrigal Avoca upped the tempo and kicked the next six goals on their way to a 46 point win and booked a place in their sixth consecutive Grand Final.
Rover, Jack Grimmond, produced an outstanding display, pulling out countless tackles and winning contested ball all day.
Ruckman, Sam Ellis, ran with star Cardiff ruckman, Tom Yensch, all day, and came out even in an important performance.
Will McKellar had a great day in the backline, picking up plenty of touches and taking several important intercept marks.
Kurt Fleming, Chris Bishop and James Webster won the clearances, often after the in-and-under work done by Grimmond.
Veteran Van Dam kicked four goals for Terrigal Avoca, with small forward, Ryan Webster, chipping in with three majors.
Van Dam managed two goals for the Panthers as they kicked superbly well in the strong breeze.