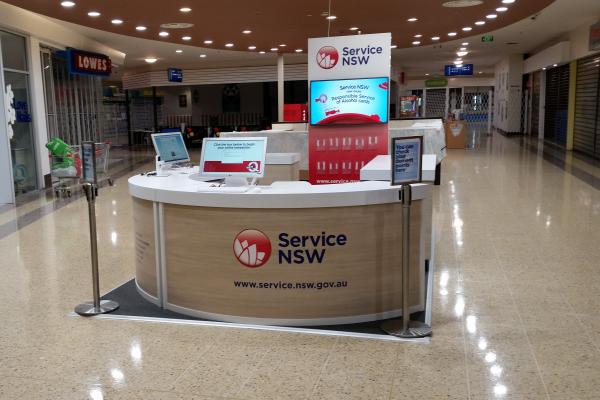 The NSW Government has announced it will keep the Service NSW kiosk open in a Woy Woy for another 12 months beyond its planned closure in September.
Minister for Finance, Services and Property Mr Victor Dominello said: “Customers have voted with their feet and there has been a strong patronage of the Service NSW digital store in Woy Woy.
“The Service NSW digital store is a great model to help educate customers about online transactions.
“With 150 customer interactions each day at this site, there is a good reason to keep the Woy Woy store open.
“I have asked Service NSW to keep the digital store open at Deepwater Plaza for another 12 months to assist residents of the Peninsula,” Mr Dominello said.
The announcement came the day after Member for Gosford Ms Liesl Tesch was expelled from the Legislative Assembly chamber.
Ms Tesch said she was kicked out of parliament on August 10 for “fighting to keep the kiosk open and for pressuring the government to fully restore the Service NSW office on the Peninsula”.
In a media statement released that day, Ms Tesch said: “The pop-up was never a serious option for the government.
“They wanted the trial to fail, and are pulling the pin now the by-election is over.”
Ms Tesch said the pop-up wasn’t equipped to provide vital services relied upon by locals, and was just a cynical trick by the government.
“The pop-up could never be a replacement for a dedicated Service NSW office,” Ms Tesch said.
“Residents who tried to apply for a licence, get an accessible parking permit, recharge their Opal card, or older drivers attempting to renew their licence, were all told they couldn’t be helped.
“The pop-up trial was a smokescreen for Liberal cuts on the Peninsula, and was purely for the by-election, not to support locals.
“We need a full-service RMS Office back on the Peninsula, and I will be fighting, together with the community, to demand the government bring services back,” Ms Tesch said.
However, Member for Terrigal Mr Adam Crouch has disputed Ms Tesch’s assessment.
“She has shared false information about its usage, customer satisfaction and closure without bothering to fact check any of these claims.
“The statistics don’t lie, on average the Woy Woy Kiosk has over 800 customer interactions each week and has completed over 15,000 since opening in March,” Mr Crouch said.
“That is why they have given it a tick of approval through an amazing 99 per cent satisfaction rating,” he said.
“The fact is, the kiosk is a success story,” he said.
“I am delighted to hear that the digital store is being extended.
“More customers are now turning to online and digital transactions, due to the convenience of not having to travel into store.”
Parliamentary Secretary for the Central Coast, Mr Scot MacDonald, said the extension of the kiosk was a win for residents in Woy Woy.
The Woy Woy digital store is open 9:30am to 5:30pm, Monday to Saturday, and is located outside the Commonwealth Bank at Deepwater Plaza.