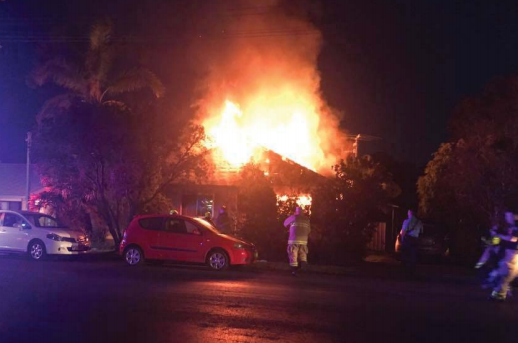 The two-bedroom fibro home was occupied by two elderly residents, a man and a woman, who self-evacuated when they realised the house was on fi re. One resident suffered minor burns and the other was treated for smoke inhalation. NSW Fire and Rescue reported that one room was severely damaged and the remainder of the home was damaged by heat, smoke and water. Central Coast Duty Inspector for NSW Fire and Rescue, Mr Steve Moran, said the fire had started in one of the home’s bedrooms but, due to the extent of the damage, the cause was undetermined.

An asbestos alert was also issued and Hazmat crews attended the scene, which Mr Moran said was standard practice in house fi res where asbestos was present. Residents from a neighbouring group home were also evacuated from their house as a precautionary measure. Four fi re trucks attended the fi re and Mr Moran said it had rendered the house “structurally unsound”.