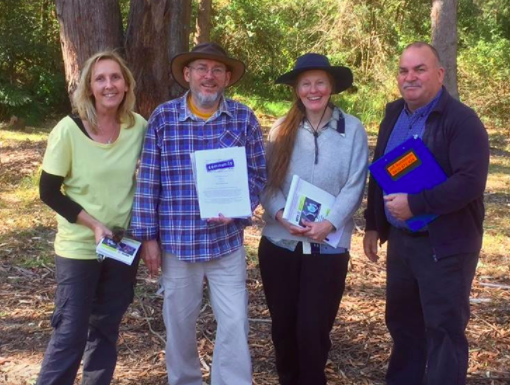 The Empire Bay and Districts Roads Action Group is still waiting for Central Coast Council to provide costings to completely rebuild Greenfield Road.
“It’s been one year since the group was formed to act on the appalling condition of our roads and drainage,” said convenor, Mr Gregory Olsen.
“Since the inspection in January by Council, I have been in regular contact with Mr Boris Bolgoff, senior manager of roads and drains.
“We are still waiting for Council to provide costings, including kerbs, gutters, enclosed drains, on-street parking and a path on its eastern side,” he said.
“The costing will be submitted to Member for Terrigal Mr Adam Crouch, who agreed to lobby the State Government on behalf of our community.”
Mr Olsen said photographs were recently sent to Council to reinforce the deterioration of local roads.
Some heavy patching was recently completed “but as the asphalt ages and traffic pounds Greenfield Rd, the group is lobbying for a complete rebuild.
“Fifty kilometre signs have been installed along with road markings and a Give Way sign at the intersection of Greenfields and Rickard Rds,” Mr Olsen said.
“The troublesome T-intersection at Empire Bay Dr and Greenfield Rd has also been made safer.
“Disturbingly, some motorists are breaking the law by crossing the double lines and driving over the rumble bars to get around cars turning left into Greenfield Rd,” he said.
The RMS was expected to monitor driver behaviour in the area following photographic evidence submitted by the group.
“Hopefully motorists will get used to the changes and exercise responsible restraint, at all times, when approaching the intersection,” said Mr Olsen.
“Remember to report any new potholes to Council by phoning 4325 8222.”