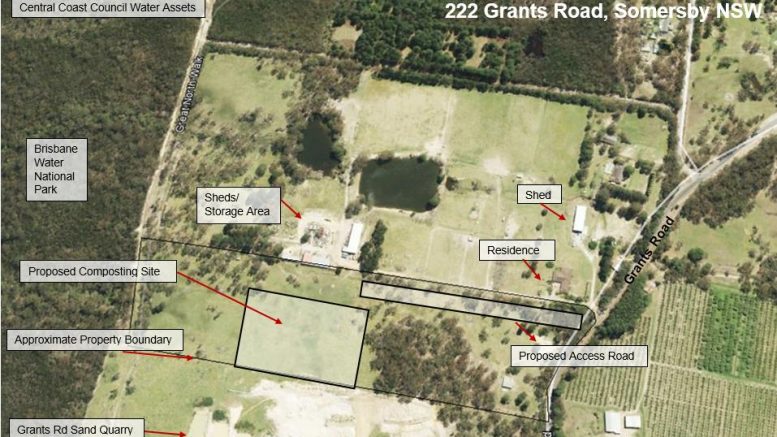 An overview of the composting site at Somersby

Forty-eight submissions have been received by Central Coast Council in response to a development application for an integrated composting facility at 222 Grants Rd Somersby.
Piccoli Pty Ltd, trading as 3Pallaettes, through an Organics Infrastructure Grant, is seeking to establish a controlled open windrow composting facility on 1.5 hectares of land within a larger property.
At maximum capacity, the facility would compost up to 5,000 tonnes per annum of organic waste.
It would produce soil conditioner to be supplied to identified local agricultural and horticultural markets.
Garden and landscaping organics, untreated timber, and fibrous organics are anticipated to form 70 per cent of the material processed at the site, with the remaining 30 per cent of materials consisting of other natural or processed vegetable organics, commercial food waste and agricultural waste.
In return for a maximum input of 5,000 tonnes per annum (TPA), approximately 3,000 TPA of saleable material would be produced, according to the applicant.
“The 40 per cent process loss is due to heat and evaporation during the decomposition process,” the applicant said.
The facility would use vermiculture (the use of earthworms) for pre-processing of some material and then pasteurisation by open windrow composting of all material.
According to a Statement of Environmental Effects (SEE) submitted in support of the DA, the goal of the project would be to divert organic waste from landfill, to appropriately recycle those materials through composting and to beneficially apply the product to the land.
The SEE said the DA have been submitted as an integrated development in accordance with Part 4, Division 5, Section 91 of the EP&A Act.
“The development of a controlled composting facility at the site is considered a scheduled activity but it is understood that an Environmental Protection Licence (EPL) would not be required …until such a time that more than 200 tonne of organics are on-site, or more than 200 tonne of putrescible organics are processed in a single year.
“An EPL will be required for the facility to exceed these parameters.
“Following consent of this DA, an EPL will be sought from the EPA.” View east towards the property entry gate on Grants Rd

The key potential environmental issues identified in the SEE were: air quality; surface water and ground water protection; transport and traffic issues; and security, safety and sustainability.
The site for the facility would be located within a larger property located on the Somersby Plateau, approximately 8.5 km north-west of the Gosford CBD.
Part of the property was previously used as a council quarry for the extraction of gravel, presumably for road base.
“Except for quarrying activities, it is understood that since clearing, the land has been used for grazing purposes,” the SEE said.
It is surrounded by the Hanson sand quarry, two council-owned, above-ground water storage tanks, an earthen bund associated with the Grants Rd sand quarry and the Grants Rd quarry pit to the south and other privately owned rural/residential properties, some of which appear to be used for market gardening and poultry production.
An easement for a water supply pipeline and Brisbane Water National Park are also located nearby.
The proposed development affects land zoned RU1 Primary Production.
The site is located within the Somersby 3: Agricultural Plateau and Hillsides Character Place which “should remain productive rural landscapes that accommodate broad-acre agricultural or livestock activities, together with a scattering of residential and small scale tourist activities that do not interfere with the preferred primary-productive uses”.
The SEE argued that the compost facility would fit with the Desired Character statement because it would support the local agricultural industry through the supply of compost.
“Local agricultural wastes such as spent poultry litter could be used as inputs to the compost process, contributing to responsible waste resource recovery in the local area.
“The development is not considered to preclude future broad-acre agricultural or livestock activities, or other development consistent with the Desired Character.”
According to the SEE, it would take around 10 weeks to produce fully-mature compost using the controlled open windrow system.
A windrow will be turned initially once per day during the break down phase (generally two weeks), then once every second day thereafter decreasing to a point where no turning is required during the maturation phase (approximately after week eight).
“Temperature, CO2, ammonia and water will be monitored daily.
“All process control records, laboratory testing and record keeping will be kept in accordance with EPA licencing and AS4454 (2012) requirements,” the SEE said.
“An open windrow system requires the operator to be more involved in the process, enabling them to be more aware of the windrow conditions ensuring a quick response to addressing any process or environmental concerns.
“Vermiculture is the only method the EPA will allow to compost Category 3 inputs without demonstrating the prevention of odorous emissions and degradation of the local amenity … as vermiculture does not require turning of the biomass, and will be covered with a thick (minimum 150 mm) layer of cured compost, it is recognised … to be without significant odour-emission problems.

“Management practices will include inspection of all loads prior to and during unloading, with 3Pallaettes staff present at all times.
“Any highly contaminated loads will not be allowed to unload, or if discovered during
unloading, will be re-loaded and sent back.
Subject to availability, it is anticipated 3Pallaettes will use organic material from Category 1: garden and landscaping organics such as grass; leaves; arborist mulch; clay; untreated timber: sawdust; shavings; packaging; natural organic fibrous organics: seed hulls/husks; straw; processed fibrous organics: paper; cardboard; paper processing sludge; and, non synthetic textiles.
Category 2 includes: other natural or processed vegetable organics such as vegetables; fruit and seeds; processing sludges and wastes; brewery and distillery wastes; food processing wastes; and manures: animal manure and mixtures of manure and biodegradable animal bedding organics.
Category 3 includes: meat, fish and fatty foods including carcasses and parts of carcasses; blood; bone and fish.
The proposal includes protective measures such as berms to prevent the spread of odour and fully lined leachate ponds to protect against ground and surface water contamination.
However, the primary concerns expressed in the objections received by local residents and business owners were the risk of pathogenic contamination of nearby rural pastures and animals.
For example, a letter from Mr David Parrott, Livestock Manager for Cordina Chicken Farms, stated: “The success of the poultry industry relies on maintaining rigorous quarantine and biosecurity measures and having this facility located amongst existing poultry operations will make this almost impossible to manage.
“It is therefore the position of Cordina that this proposed composting facility at Somersby poses a major biosecurity risk to its poultry operations in the surrounding area.
“There are approximately half a million broiler chickens within 1km and a further 3 million within 10km of this proposed operation.
“Exposure to poultry manure, carcasses and organic material from other farms, either from the facility itself, or during transportation to the site, can introduce disease to surrounding poultry farms and result in morbidity, reduced productivity and/or mass mortality.
“Composting facilities close to farming operations can also be a source of ongoing pathogen transmission and make it impossible to successfully implement quarantine measures and eradicate disease from the area.
“It is our opinion that this facility ought to be refused, based on the risk posed to the existing poultry industry in the surrounding area.
“Such a composting site could easily be located elsewhere in the state of New South Wales or within a greater distance from existing poultry farms and away from their current transport routes.”
The application was referred to the NSW Department of Primary Industries in May and has not yet been determined by staff or referred to a council meeting.