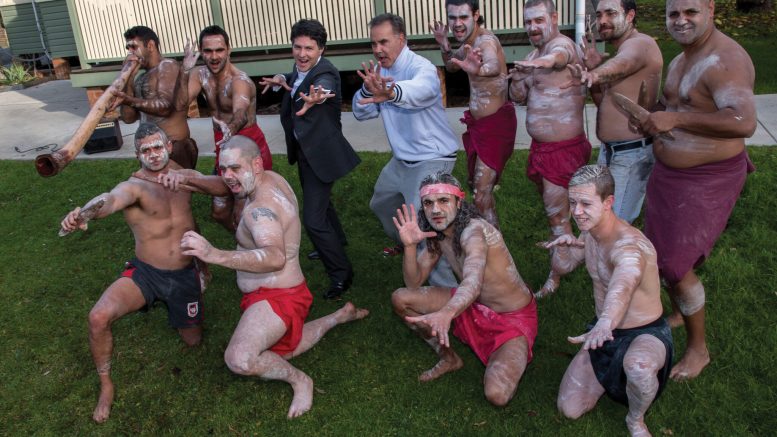 NSW Minister for Finance, Services and Property, Mr Victor Dominello paid a visit to the Glen Centre at Chittaway Point on Thursday, June 15.
The Glen Centre, run by the Ngaimpe Aboriginal Corporation, provides treatment for males with drug and alcohol addictions in the Central Coast area.
The Glen also assists individuals who are eligible to perform a Work and Development Order (WDO) to resolve their fines’ debt.
As Minister for Finance, Services and Property, Mr Dominello is responsible for the Office of State Revenue, which is charged with debt collection and the WDO program.
Since August 2009, 246 non fine payers have entered into WDOs with the Glen Centre and resolved a total of $367,000 in outstanding debt.
The Minister received a tour of The Glen premises by their Assistant Coordinator, Mr Joe Coyte, and Office of State Revenue Aboriginal Liaison Officers, Mr Terry Cook and Mr Lawrence Crawford.

He was given an opportunity to learn more about the 12 week program as well as meet some of the men who have or are currently undertaking the program.
“One gentleman in particular made the point that as a consequence of being able to apply for a WDO, he not only repaid what would have otherwise been an impossible debt, but also managed to obtain a job and buy a vehicle,” Mr Dominello said.
At the conclusion of the tour, the Minister was treated to a series of traditional indigenous dances and stories.
Lendlease are one of the major supporters of the program, and work with the WDO program as well as in finding longer term employment for the participants.
According to Mr Dominello, a WDO allows eligible people who are suffering significant hardship to pay a fine through methods alternative to paying in cash.
Customers can access training or treatment programs and undertake voluntary work as a way to resolve their fine whilst giving back to the community.
Options include: unpaid work for an approved organisation; medical treatment in accordance with a health practitioner’s treatment plan; an educational, vocational or life skills course; financial or other counselling; drug or alcohol treatment; and a mentoring program for those under 25 years of age.
WDOs avoid the need for enforcement action, such as: suspending a driver’s licence, which can lead to secondary driver offending and escalating court sanctions; garnishee orders against bank accounts, which can have a disproportionate effect on vulnerable and disadvantaged customers; and as a last resort, property seizure orders.