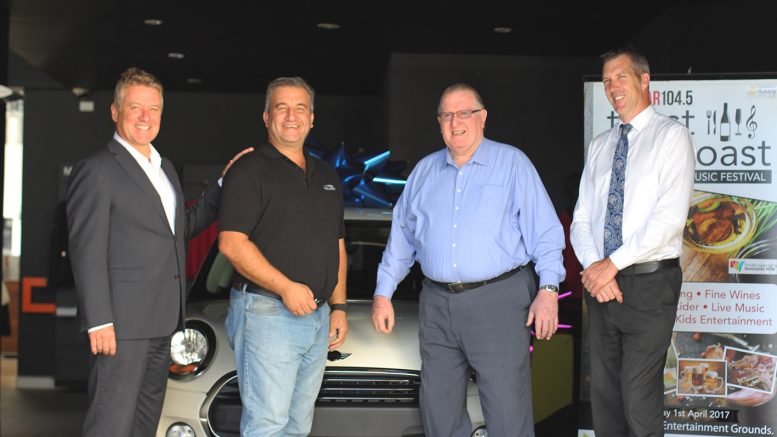 Mr Raffie Nercessian being presented with the car

Gosford City Rotary Club has celebrated the success of the 2017 Toast the Coast with a donation of $54,500 to Coast Shelter’s Domestic Violence programs.
Blessed with a magnificent sunny day in the middle of days of rain, Toast the Coast at Gosford Entertainment Grounds, hosted almost 100 food and wine stall holders who provided fare to more than 8,000 visitors.
“Everyone came away from the event happy and asking for the next one,” Mr Michael Goodwin, President of Gosford City Rotary Club said.
“With the assistance of Mr Chris Holstein and his magnificent team of volunteers, we managed to sell 15,500 raffle tickets for a Mini Ray donated by Worthingtons Mini Garage.
“The car was won by Mr Raffie Nercessian from Simply Smashing Auto Group, and we were thrilled to present him with the keys,” Mr Goodwin added.
Based on the success from the last two years, the Toast the Coast Committee is looking to making it an ongoing annual event.
“Unfortunately, incidents of domestic violence in our community continue to rise and it is truly wonderful to see our Rotary Clubs raising funds to prevent it, and to provide accommodation and support for victims of this terrible scourge in our community,” Mr Laurie Maher, Executive Officer of Coast Shelter said.
“Supported by our local police patrols, other support programs and the Central Coast Domestic Violence Network, Coast Shelter is providing a range of services to address issues surrounding domestic violence and Gosford City Rotary Club is more than happy to assist wherever possible,” Mr Goodwin concluded.