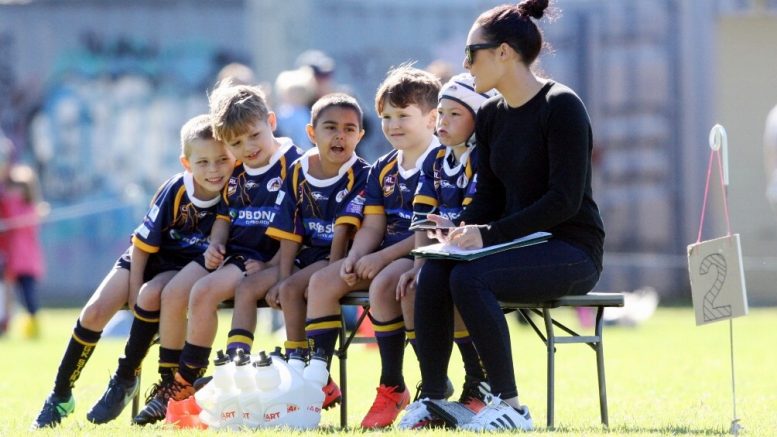 The Central Coast junior rugby league competitions have kicked off for the 2017 season with the opening fortnight offering the Gosford Kariong Storm mixed results.
The most emphatic victory of the opening round garnered a 46-0 score line as the Storm under-12(3)s ran roughshod over the luckless Raiders at Blue Haven.
The Michael Sam’s coached twelves include a handful of members from last year’s under-11(1)s, after the premier division squad were forced to disband during the off season following the loss of a host of players and a coach.
The Storm have lodged an appeal with the CCDJRL in a bid to have the side regraded into division two and the lopsided nature of their first up win only adds weight to the claim.
The Gosford under-10(3)s are another side to have begun the new season brightly.
A narrow 10-8 win at home against the Tigers in round one was followed up with a comprehensive 24-8 victory at Woy Woy.
First half tries to Angus Bills, Ryan Sanchez and Jacob Bond provided the visitors with a 12-0 half time lead, and the Storm boys and girls continued to run freely after the break.
Powerful forward, Dylan Wade, who suffered the misfortune of breaking a forearm last season, had a tremendous game up the middle, while utility player, Sunny Mayles, was at his bustling best.
The highlight of the early morning contest however, was provided by a young lady playing in just her second game of rugby league.
Annabel LeMaistre split the Roosters defence from well inside her own half and strode out into open field with all the grace and form of an Olympic sprinter, before a frantic cover defence managed to rein her in just metres shy of the corner post.
In other results; the under-13(2)s bounced back from a heavy loss at Wyong in round one to edge out Woy Woy 14-10, having trailed by six early in the second half.
A try in the right corner to winger, Max Zonno, was followed shortly after by a barnstorming charge up centre field from prop, Jake Sutherland, all of which helped push Gosford to the lead.
Sadly, the game ended four minutes early after the aforementioned Jake Sutherland received an accidental knock to the head and required a precautionary trip to Gosford Hospital via the back of an ambulance.
Thankfully, young Jake was back home later in the afternoon with all of his faculties intact.
The Rod Godoy coached under-11(1)s are the club’s sole division one side this season and have given positive indications that they will be competitive in the premier grouping, having pushed last season’s runners up, The Entrance, during a 30-18 loss in their most recent outing.
While up in the senior ranks, the injury-plagued Storm Open Grade side led by four, midway through the second half against the Warriors in their round five clash, before conceding three late tries to fall to a 22-10 defeat.