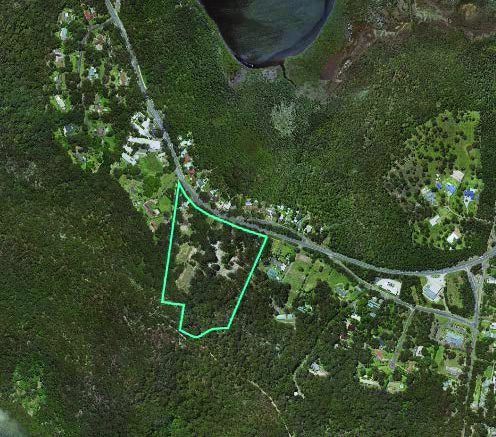 An Aerial view of the proposed Seniors Living development

Central Coast Council has rejected a planning proposal for seniors’ housing in Empire Bay Dr, Empire Bay.
“The development represents an isolated residential use which is out of character with the surrounding rural-residential character of the locality and would set an undesirable precedent for similar ad-hoc proposals,” said a report from council staff to administrator Mr Ian Reynolds.
“The land is unsuitable due to a range of ecological and physical restraints,” the report said.
“The site is located in an isolated, out of centre location and is an unsuitable location for an aged person’s development.
“Servicing issues for the development are unresolved.
“The proposal is not supported by any local or regional planning strategies.”
The report also argued that the proposal was inconsistent with: the Central Coast Regional Plan 2036; State Environmental Planning Policy 19 Bushland in Urban Areas; and Ministerial Directions on Environmental Protection Zones, Flood Prone Land and Implementation of Regional Strategies.
In addition, the report to Mr Reynolds argued the site comprised vegetation mapped as Regionally Significant Vegetation Community E22ai – Narrabeen Coastal Blackbutt Forest.
“The site provides suitable habitat for a number of threatened fauna species known to occur in the locality which utilise the hollow bearing trees are located on the site.
“The site also forms part of a biodiversity corridor which links Bouddi National Park in the south to Cockle Bay Nature Reserve to the north east.
“The site is located upstream of a State Environmental Planning Policy 14 wetland.
“Impacts on the local hydrogeology associated with cut and fill, erosion and sedimentation to this sensitive ecological receptor have not been demonstrated.
“The Initial Preliminary Review of the Site’s Biodiversity Values (dated May 11, 2016) stated that the portion of the site currently zoned 7(a) Conservation would remain largely undisturbed by the proposed development.
“The subsequent bushfire assessment of the site by Clarke Dowdle and Associates does not support this statement and identifies that a significant area of bushland within the 7(a) Conservation zone will need to be cleared to meet Planning for Bushfire Protection 2006 requirements for Senior Housing,” the report said.
The subject site was located within the deferred matters lands under the 2014 Gosford Local Environmental Plan and was zoned part 7(c2) Scenic Protection (rural small holdings) and part 7(a) Conservation under Interim Development Order 122.
Seniors housing was not permissible in the 7(c2) zone under IDO 122 or NSW Seniors Housing planning policy.
In 1982, a development application was submitted for a retirement village comprising 95 self-contained units and a 15 room hostel on the 7(c3) Conservation and Scenic Protection (Coastal South) zoned portion of the site.
The former Gosford City Council granted development consent to the proposal but the consent was never acted and lapsed in January 1986.
In May 1983 Sydney Regional Environmental Plan No 6 Gosford Coastal Areas rezoned the 7(c3) Conservation and Scenic Protection (Coastal South) portion of the site to 1(d) Rural (Urban Investigation).
In July 1998, the Gosford Local Environmental Plan No 351 commenced, resulting in the rezoning of the 1(d) Rural (Urban Investigation) zoned land on this site to 7(c2) Scenic Protection (Rural Small Holdings) under the IDO 122.
A Planning Proposal was lodged with the former Gosford Council in October 2011 seeking to permit Seniors Housing development but was not supported by Council at that time.
The proponent has lodged a request with the NSW Department of Planning and Environment (DP&E) for a rezoning review because Council has not determined a further Planning Proposal lodged in 2016.
It is expected that the matter will be considered by the Joint Regional Planning Panel meeting on June 8.

Suiting up for science at Empire Bay