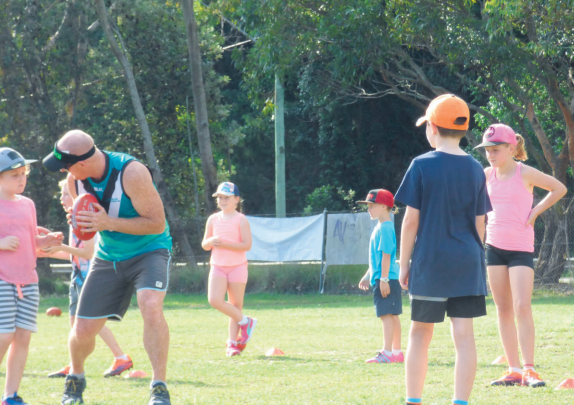 Pre-season training has begun for the Peninsula Junior Swans

Training for the Peninsula Junior Swans kicked off this month with Mr Mark Iveli and Mr David Brook taking a group of enthusiastic junior players through fitness and skills training at Kitchner Park, Ettalong on Thursday, March 9. During these pre-season training sessions, all ages trained together giving older players a chance to mentor and help younger and less experienced players learn and build skills.

With grassroots AFL rising, and the launch of a National Women’s league in AFL, never has the future for the Peninsula Junior Swans looked brighter, according to the coaches. Rogers Park is the home ground for the Junior Swans, which with its playing surface restored by the former Gosford Council is claimed by the club “to be one to the best on the Coast”. The club saw itself as providing local juniors with a wider choice of winter sports. “We have many youngsters who play more than one code of football in winter, AFL on Sundays which helps with fitness and all round ball skills for all other football,” Mr Iveli said. This year, the club has introduced a “boot bin” for players to donate old boots for community use once they grow out of them. Peninsula Junior Swans hope to field seven teams this year in under-9s, under-11s and under- 12s, which can be played mixed with girls and boys on the same team.

This article appeared first in the printed edition of Peninsula News