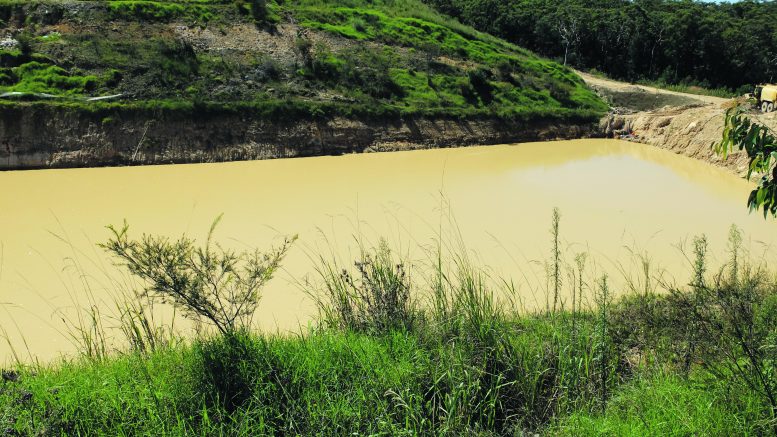 The recent heavy rains have renewed community fears about the safety of the Mangrove Mountain landfill.
Mountain Districts Association (MDA) spokesperson, Ms Marilyn Steiner, said: “The piecemeal way that the site has been constructed, with little regard for Environment Protection Authority (EPA) Guidelines on best practice, means that every time there is prolonged and heavy rain, the waste pile, with its steep sides, becomes saturated, and sheds torrents of water containing toxic leachate.
“This leachate-laden water runs into the settlement ponds and ground water aquifer and also directly into the gully which leads to Stringybark Creek, Ourimbah Creek and the Central Coast’s water supply.
“Once the settlement ponds are full, there is no place for the untreated water to go except off-site, which the EPA says is not permitted,” she said.
“This prohibition does not appear, from many years of photos obtained through GIPA searches, to have been enforced.
“MDA identified that blatant pumping out of settlement ponds plus the leachate pond off-site has been taking place under the nose of the EPA for years, and it has taken persistent questioning to engage the EPA in making its own enquiries and enforcing its own regulations,” she said.
The substantial contaminant plume observed and photographed by residents in Ourimbah Creek in late July 2015 was traced back by Ken Brookes, Catchment Management Officer of the former Wyong Council, to Hallards Creek and thence uphill to the north-east corner of the landfill, Ms Steiner said.
“The previous heavy rains in April 2015 may have created a similar crisis in rainwater management to that currently being experienced.
“The usual run-off point is the low SE corner of the landfill where there is a spillway and gully running into Stringybark Creek and a pond on the golf course.
“It is the obvious place for water monitoring.
“In this instance, it is alleged that for several weeks, possibly months, judging by the depth of the gully downhill and the extent of dead vegetation, run-off was pumped instead uphill to this North-East corner.
“It is alleged the contaminated water was then directed under the fence into the Jilliby Conservation area, which is not accessible to the general public and where detection was unlikely.
“Despite no charges ever being laid by the EPA, the scandal forced the operator to find other ways of dealing with excess run-off, and an area called Cell W became the temporary repository.
“Cell W is the next area scheduled to receive waste if and when the site is re-opened, and is on the southern edge of the current waste mound.
“It was excavated in 2012.
“In January 2016, MDA observers estimated that Cell W contained 20 million litres of contaminated water.
“So what to do with all this contaminated water?
“The recent long dry spel,l plus use of evaporators and sprinklers, succeeded in emptying Cell W by February, ready, the operator no doubt hoped, for impervious lining prior to receiving waste.
“However, we are back in the same situation because in Australia it does actually rain for extended periods on occasion, and Cell W is yet again filling rapidly, despite run-off now being directed into settlement ponds.
“And what now happens when these are full, apart from illegal, unrestrained overflow into the catchment?
“It’s business as usual.
“The site is unlikely to ever be able to contain rainfall run-off, so this is a vicious cycle.
“MDA has a major concern that the EPA is still not monitoring this site adequately.
“It has officially lodged a complaint, but it should not be the community’s job to police the landfill.
“In fact, there is no public oversight reasonably possible, because the operator owns the only viewing point, the golf course, and has forbidden the MDA access to both the landfill and the golf course, with multiple video surveillance cameras policing the perimeter.
“How does this come about, that a major landfill poised above a water catchment can operate without any public monitoring?
“If Buttonderry, Woy Woy and Kincumber landfills are Council-owned and operated under strict guidelines, why is this landfill allowed to operate privately under the radar, especially with its history of appalling environmental management?”
In Central Coast Council’s recent Financial Report, note 23, page 79, it states that the assets, rights and liabilities of the former Gosford City Council have been transferred to Central Coast Council.
“So step up Central Coast Council and do the right thing by implementing new proceedings in the Land and Environment Court with the aim of closing and remediating this huge blight on Council’s record,” Ms Steiner said.