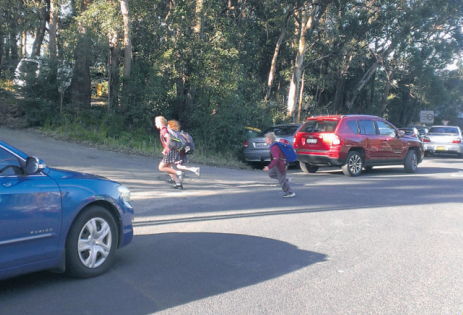 The parents and community of Point Clare Public School will hold a demonstration on Friday, March 10, to continue their campaign for a 40km per hour zone along Brisbane Water Dve, at the front of the school.
Traffic safety at the public school has become one of the first issues in the campaign to win the by-election in the Seat of Gosford.
NSW Opposition Leader, Mr Luke Foley, was recently joined by Labor candidate for Gosford, Ms Leisl Tesch, and parents from Point Clare Public School, to discuss issues surrounding the long awaited school zone.
Parents have been lobbying successive State Governments for over a decade to establish a School Zone on Brisbane Water Dve in front of the school.
Concerned Point Clare resident, Mr Anthony Buckley AM, said: “Seventeen accidents in four years have occurred on this very stretch of road, less than 800 metres between Scott St and the roundabout at Point Clare South.”
Ms Tesch said: “We would like something done before there is a fatality.”
Mr David Monaghan from the Point Clare Public School P&C said that it has been an ongoing battle for both the school council and the P&C.
“The Roads and Maritime Services (RMS) is the road block here, for some reason they don’t want to listen to the politicians,” said Mr Monaghan.
“They consider traffic flow to be more important than safety.”
Mr David Harris, NSW Shadow Minister for the Central Coast, was Principal of Point Clare Public school and has committed to installing the School Zone in 2019 if Labor wins the election.
Mr Foley was critical of the RMS and their ongoing delays and endless reviews.
“I will listen to local parents before I listen to departmental officials in Newcastle,” Mr Foley said.
“My appeal to the Liberals is to come with us on this, there will be plenty of other things we can fight about in this by-election.”
The demonstration will be held outside Point Clare Primary School at 2:30pm on Friday, March 10.

Speed camera may be the answer for Point Clare