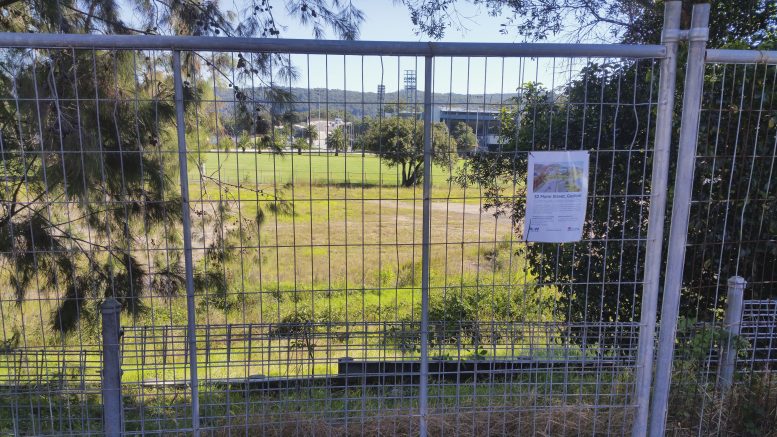 Property NSW has confirmed that the remaining 1.1 hectares of land from the former Gosford Public School, including the 7,000 square metre State Finance Office building, is to be sold as a single parcel of land.
“The current two-stage tender process undertaken by Property NSW relates to the remaining unsold parcel of land at 32 Mann St, Gosford,” Property NSW said, in a written statement in response to questions from Coast Community News.
“The site is approximately 1.1 hectares in area and is bound by Mann St, Vaughan Ave and the Gosford City Park.
“The Property NSW strategy is to sell the overall site in two tranches,” the statement said.
The first tranch was sold to the Doma Group as part of an EOI process for a site known as 20 Mann St, the sale of which was completed in late 2015.
In other words, there is no third parcel of land on the corner of Vaughan Ave and Mann St that could be purchased by Central Coast Council for use as a performing arts centre, unless it was on-sold by the successful tenderer.
“The current Expression of Interest (EOI) process is for the sale of the remaining 1.1 hectares of the site,” the Property NSW statement clarified.
“It includes 32 Mann St, Gosford, and the proposed 7,000 square metre mixed-use commercial building that will house in excess of 300 Department of Finance, Services and Innovation staff from late 2018.
“The development of the site is subject to an EOI process that will seek private sector interest in the purchase and future development of the remaining 1.1 hectares of the site and is proposed to include the 7,000 square metre mixed-use commercial building at 32 Mann St.
“Consistent with its concept masterplan, lodged as part of its planning proposal for the 32 Mann St site, the Government is proposing to sell the 1.1 hectare site to a development partner able to realise its vision of delivering a mix of uses on the site including: restaurants; car parking; short-term accommodation; and, residential; generous open space for the community that will provide pedestrian access between Mann St and the waterfront precinct.
“Approximately 60 per cent of the site is available for redevelopment in accordance with the existing zoning and planning controls.
“Property NSW is currently reviewing the tender proposals received during its EOI process and will announce a preferred proponent shortly.
“The proposed uses of the site comply with the Central Coast Council’s ‘Gosford Development Control Plan’.
“Importantly, they will ensure the site contributes to activation of the Waterfront Precinct and support the revitalisation objectives detailed in the ‘Our City, Our Destiny Masterplan’,” the statement said.
Sale of the site has been subject to a two-stage competitive process.
The EOI was completed in late 2016, with a shortlist of proponents invited through to the second stage Request for Tender (RFT) process.
This RFT process is at an advanced stage with the preferred proponent expected to be announced shortly.