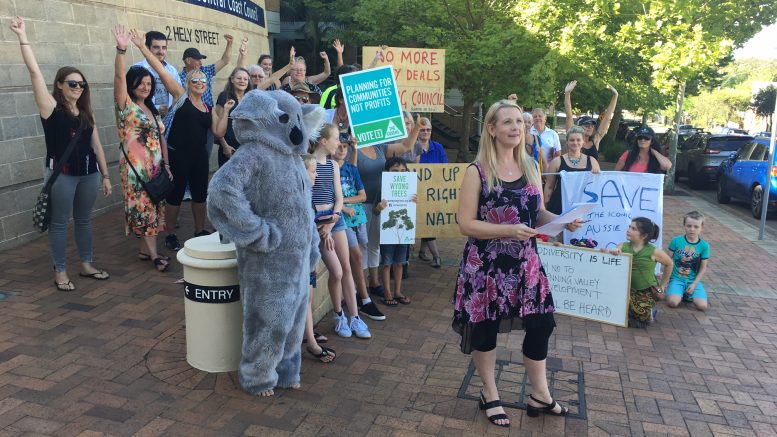 Ms Kylie Boyle (front) announced she would run in the September elections at a community environment rally outside Wyong Chambers Photo: Dilon Luke

Glenning Valley resident and activist, Ms Kylie Boyle, announced the Glenning Valley development has been placed under controlled action by the Federal  Department of the Environment and Energy due to the possible presence of Koala habitat.
Ms Boyle also announced her intention to run in the September 2017 Local Government Election, during a conservation protest outside Wyong Council Chambers on February 22.
Ms Boyle, who has been a community leader and steadfast presence campaigning against development plans for Glenning Valley, announced, during the Save Glenning Valley Koala rally, that she would run as a candidate for the Sustainable Development Party.
The rally, which was led by Ms Boyle and fellow Glenning Valley resident and Say No to Glenning Valley development activist, Ms Jessie Fancett, voiced serious concern regarding the valley’s future as a potential koala habitat.
According to Ms Boyle, koala scats were identified in the valley in both 2007 and 2008, and that despite this, plans to develop housing within the area have gone ahead.
The Central Coast koala is virtually extinct, meaning any documented koala habitats in the region should be monitored for signs of the species, something Ms Boyle said has not been done.
meaning no further action may take place in this area without federal approval under the EPBC Act.
“This result was achieved through hundreds of submissions to Council and by pointing out the inconsistencies between what the developer was telling the Department of Environment and what it was telling Council,” Ms Boyle said.
“We have been able to halt this development, but we must keep fighting.
“This could be our last chance to save our koalas on the Central Coast.
“We know that numbers have dwindled and we know this area has been identified as home and habitat for the species,” Ms Boyle said.
Ms Boyle and Ms Fancett also said that as far as they were aware, no evidence of SEPP 44 (State Environment Protection Procedure 44) had been actioned.
Coast based activist, Mr Jake Cassar, who was in attendance at the rally, said SEPP 44 related specifically to the protection of koalas and that steps should have been taken by now.
“We aren’t telling the government to do anything unusual here, we’re simply asking them to follow their own laws in relation to SEPP 44,” Mr Cassar said.
“According to SEPP 44, if koala scats are found in an area, then that area is automatically deemed koala habitat and is therefore a protected area and requires further study and investigation.
“We haven’t made this up.
“The scat records are there and we know this species is critically endangered, so there are no excuses as to why specific studies under SEPP 44 have not been issued,” Mr Cassar said.
According to Ms Boyle, the koala scat records of 2008 have apparently disappeared, and the 2007 scats have been attributed to a rogue koala.
Both Ms Boyle and Mr Cassar were vocally sceptical of these claims.
Ms Boyle also highlighted that the development zone was also habitat for other critically endangered wildlife, such as the Region Honey Eater and the Swift Parrot.
Despite invitations from Ms Boyle to address the rally, Council’s Administrator, Mr Ian Reynolds, did not attend the gathering.
Ms Boyle said Mr Reynolds declined her invitation because the matter was before the Land and Environment Court and that it would be inappropriate for him to address the crowd or to meet with Ms Boyle at any time.
“Mr Reynolds response is very disappointing,” Ms Boyle said.
“We have elections coming up and our community needs leaders who will support the community.
“If our Council will not support us, we must question their leadership.
“Our community needs leaders who will support us, not leaders who will support the developers and hide behind closed doors,” Ms Boyle said.
“I have decided to run a campaign under the newly formed Sustainable Development Party and will continue to fight the development of Glenning Valley alongside the community.
“Our fight to save this remarkable bushland is not over and I will continue to stand up for our wildlife, our environment and our community,” Ms Boyle said.