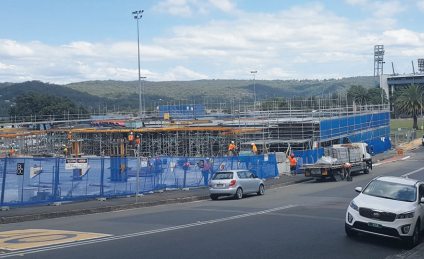 The ATO building being constructed on the Waterfront Park in Gosford

The new Gosford building for the Australian Taxation Office is expected to open for business in December, but the makeup of its staff, including the final number of jobs that will go to Central Coast locals, is yet to be finalised.

Federal Member for Robertson, Ms Lucy Wicks, has argued since 2014 that the new ATO building would create 600 local jobs. Between 2013 and 14, Ms Wicks promised 250 to 300 jobs in a Commonwealth agency but this was doubled in the 2014 Federal Budget. The unanswered question is whether those 600 positions will be jobs for locals.

A statement from the ATO said: “The ATO’s new Gosford office will offer a range of career opportunities for the local labour market and graduates of tertiary institutions in the Central Coast region, as well as providing a limited number of jobs for existing ATO employees. “The Gosford building will support a workforce of 600 employees which will include 420 ATO jobs. “External recruitment is expected to commence in the second half of 2017.

“The exact numbers and roles to be recruited are still being assessed, however, it is anticipated that ATO will be seeking between 300 and 400 new staff.” Coast Community News has learned from several ATO sources that existing employees had already been asked to express interest in moving to the Gosford office. “An expression of interest (EOI) process was conducted in December/January to fi nd a limited number of existing ATO employees interested in being considered for at-level transfer to Gosford,” a media statement from the ATO said. “We received 129 applications, with the majority of applications received from staff currently located in the Parramatta, Newcastle and Sydney CBD sites.

“We are encouraged by the number of staff that expressed an interest; however, the fi nal number of staff to be placed will be determined by a review of the skills and capabilities of those who applied and roles we expect to fill. “The EOI was run to ensure an appropriate number of experienced and trained staff are in the site to ensure a smooth transition to and establishment of the Gosford site. “The Gosford site also includes planning for 180 employees from other Commonwealth agencies and departments,” the statement said. Commissioner of Taxation, Mr Chris Jordan, told a Senate Estimates Hearing in 2016 that there would be no large relocation of public servants to the Gosford Tax Office.

“We will clearly need some existing people to run an office. “Some people who live in Gosford work in Newcastle. “It seems like a reasonable thing. “Some people who live in Gosford travel down to Penrith, Parramatta or the CBD in Sydney. “We are looking to recruit the vast bulk of the people from that local area,” Mr Jordan said. The Federal Labor Opposition has criticised Ms Wicks’ claims about the creation of 600 jobs, stating that they will not be for local people. Ms Wicks, who has championed the building’s development since its inception, accused Labor of reverting to form as job wreckers. “If Labor’s serious about backing Gosford’s future, it should stop the smokescreen of misinformation and start realising that this is the biggest jobs-generating initiative the Central Coast has seen in years.” Ms Wicks said.

“The Turnbull Government will deliver 600 new jobs in Gosford with the new Australian Taxation Offi ce site near completion, creating a positive impact in the local community. “The latest update from the ATO has once again shattered the myth that the jobs will be ‘transferred’ from elsewhere, with confirmation that locals from our region will have an opportunity to work at the purpose-built building. “The vast majority of jobs will be recruited from the local region – just like we’ve always said. “Even more importantly, the 600 jobs will generate even more local employment as workers take the short stroll down Mann St, supporting local coffee shops, restaurants, newsagents and many other local businesses.

“Cranes are already in the sky, with the building to be leased by the ATO expected to be ready by the end of the year, leading the way for the rejuvenation of Gosford City and our region. “Bill Shorten and the Labor Party have been constantly attacking this project as part of an anti-jobs agenda to try and hold Gosford back. “With these new jobs fl owing into the city, this will be a gamechanger,” Ms Wicks said.

Waterfront is being turned into a parking lot