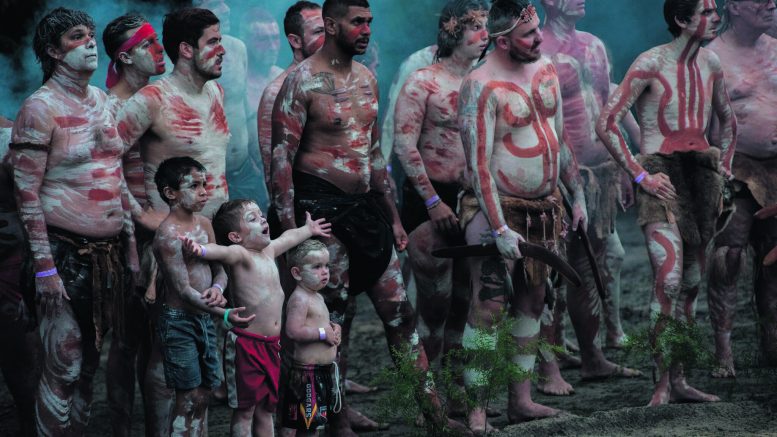 Hundreds braved harsh weather conditions at the Walk About Wildlife Park, Calga, to participate in the inaugural Central Coast Aboriginal Corroboree and Cultural Festival on Saturday, February 18.
An hour before the festival started, Calga was hit with torrential rain and hail.
This didn’t stop volunteer dancers from all over the State coming together to celebrate Aboriginal culture and brotherhood.
As the dancers from Newcastle, Dubbo, Wollongong and locally gathered to start painting their bodies, the clouds cleared, and they were left with clear skies.
The idea for the festival was born about 12 months ago, when local man, Tim Selwyn, heard that the park had saved an Indigenous women’s sacred site from destruction by the Rocla sand quarry.
Mr Selwyn decided to introduce himself and thank Ms Tassin Barnard, the park’s owner, for all the work they had done.
“I wanted to meet these amazing people because they spent a lot of time and money to save this important site,” Mr Selwyn said.
“We decided to work hand in hand to promote tourism and aboriginal culture in the area,” he said.
Mr Selwyn said it would be impossible to hold an event of this quality in Gosford, but the Walk About Park was an ideal location.
“Going through Council applying for DAs, we would have to have traffic controllers, police and it would cost too much in insurances,” he said.
“This event was all about sharing Aboriginal culture.
“We don’t want to make it a commercial event, we don’t want to sell stuff, this is all about sharing our culture.”
Organisers are planning to make this an annual event with all proceeds to be donated to local aboriginal charities.