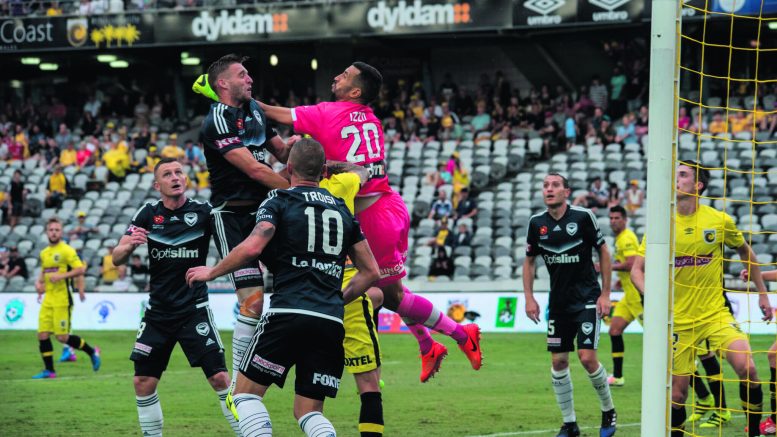 The Central Coast Mariners were unable to make it to four wins in a row, following a defeat by Melbourne Victory in Gosford on Sunday, February 19.
Hot off the back of three wins in a row, the Mariners fronted up full of confidence at Central Coast Stadium and battled with the second-placed Melbourne Victory in front of a seven thousand strong crowd who braved the erratic weather conditions.
It was a high tempo first half that saw chances flying at both ends with the wide men offering plenty throughout.
At the 25th minute, Victory’s lone striker, Besart Berisha, finished a team goal built from the left flank.
The play was started by Daniel Georgievski, who found the crafty Marco Rojas in the box.
Rojas then had Berisha charging into the area who gave Izzo no chance with his close range strike.
The home team’s fans were certain the referee should have called the goal off-side but post-match commentators put paid to their theory.
The Mariners went to the sheds at half-time trailing by one goal but held their heads up during the first half given their relative position on the table when compared with the Victory.
The Mariners came out fighting after the break and looked promising until James Troisi took the game into his own hands just before the hour mark with an individual goal.
After dispossessing Jake McGing, Troisi broke into space and fired home from a tough angle to double the Victory lead.
A misguided back pass from the Mariners allowed Berisha to pounce again at the 90th minute, and he took full advantage, dribbling around a defender before firing into the net just before the full-time whistle.
For the Mariners, Fabio Ferreira had his hand in everything as a number 10 who looked very sharp in the middle of the park.
Most of the Yellow and Navy’s success in attack was channelled down the right wing through Trent Buhagiar who whipped several balls into the box.
Unfortunately for the home team they couldn’t convert from their six corners of the first half and Melbourne Victory capitalised on their first big chance of the match.
In the second half, young midfielder Adam Berry put his hand up and attempted to jag a goal back with a rocket from thirty yards out.
Berry’s strike from distance was just wide of the upright.
As Berisha tends to do so well, the Albanian made his presence known in stoppage time with his second goal of the night in front of the travelling Victory supporters.
“Victory didn’t perform that well against Newcastle last week so we were expecting a strong performance from them, and I guess they came here smelling a little blood,” said Mariners’ Head Coach, Mr Paul Okon, after the match.
“We did well in those first 15 minutes when we were under pressure to not concede,” he said.
“From where I was sitting it looked like Bes [Besart Berisha] was offside, it could have gone either way, but I thought we started bright again in the second half.
“We had some moments and got the ball into some dangerous areas, but we really didn’t threaten the goal enough, and after a little bit of fatigue, we gave away the second and third goal, which saw Melbourne Victory go away deserved winners.
“It’s a great finish by Troisi and I think at times we saw the difference in quality between the two teams.
“We fought hard, we certainly are at no fault through effort, and it’s a result that disappoints us because it was a home game and defensively we’ve been very good of late.
“We gave the opposition opportunities and a bit of a blowout score but everything now turns to the F3 Derby.”
Central Coast Mariners travel to Newcastle on Sunday, February 26.
“The last month has been superb, the points reflect that, but even prior to that, I think we were playing OK,” Okon said.
“We had some good performances and the two games we had here over the Christmas period against Sydney and Melbourne City could have and should have given us more points.
“People ask as if we want to make the top six or if we think we can make it.
“It isn’t our focus, our focus is to compete, try and win every game and if we’re close enough then it’s obvious that we’re going to fight for it.
“From that respect, you could maybe look at tonight as a step backwards, but when you consider where we’ve come from and where we are, we still have a lot to play for.
“Our expectations have been met because I wanted to see a team that would compete every week, that would fight and try and win.
“Ultimately that’s what it’s about.
“We’ve never set up to defend for our lives or be negative, that’s not the type of football we want to play.
“We’re delighted with the way Fab’s [Fabio Ferreira] travelling, hopefully he can continue to deliver performances, we want him to score more goals and it’s a question of continuing to work and keep getting into those areas where we think he can threaten.
“At the start, he found playing as a 10 a bit difficult and he wasn’t too fond of it.
“I think it’s grown on him and he can see how effective he can be,” Okon said.

Alan Baró to return to Spain