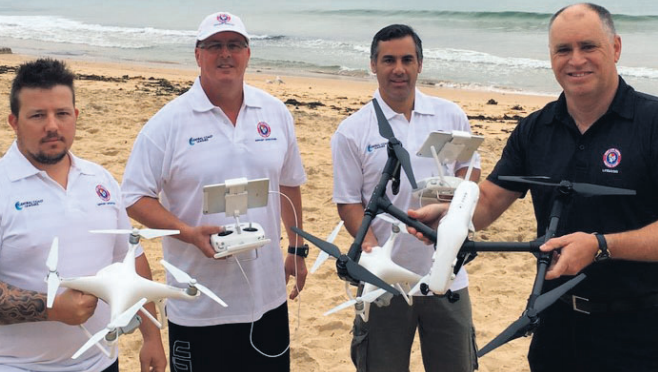 The drones will operate on a risk basis depending on surf conditions, weather conditions, time of year, tides and other factors. CEO of CCSLS, Chris Parker, said, “It’s very innovative for the Central Coast and it’s going to provide a huge additional rescue resource for our lifesaving services locally.” CCSLS currently have six operators in training, who have been flying the drones with the assistance of qualified aviators, thanks to a company called Little Ripper. “At the moment, what they’re being used for across our beaches is an extra set of eyes.

“We’ve got an influx of thousands of beach goers to the Central Coast over the six week school holidays and unfortunately, not everyone swims between the flags, even though we push hard and that’s our message,” said Mr Parker. Drone operators are able to radio through to patrols, who can then go and ask people to remove themselves from danger, and swim between the flags. The drones will also be able to act as an extra set of eyes for shark spotting, and will also operate in surf lifesaving competitions to keep members safe. “They’ll be used for junior competition and nippers’ events, as an extra surveillance to keep an eye on our members and add to our members’ safety,” Mr Parker said. He said in early tests, sharks had been easier to track using the drones.

History and importance of art within the community outlined

CBA closes branch at The Entrance