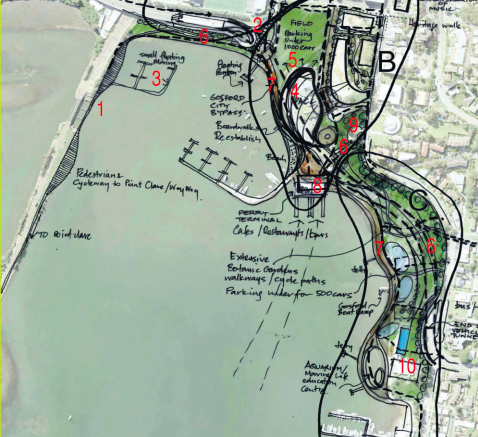 Gosford based architects , ADG, has bravely taken a blank canvass and come up with their own brand new proposal for the Gosford waterfront. ADG’s principal, Mr Anthony Kelly, said the Gosford Waterfront could be considered the playground to the Central Coast.

“It may also be Gosford City’s answer to bringing the entire community together in transforming the Waterfront Precinct, refreshing it with a World Class Performing Arts and Cultural Centre, and enhancing its natural appeal, giving it a brandnew look that showcases our natural waterways and landscape,” Mr Kelly said. He said ADG Architects is focusing on a cumulative Masterplan for Gosford Waterfront which will incorporate community values and input, ultimately establishing a great sense of community feel and spirit within the Central Coast. “The plan will rejuvenate and revitalise the entire look and feel of the Waterfront, allowing the whole community to develop a great appreciation and sense of pride in the place they call home,” he said. The 2010 ‘Our City Our Destiny’ Gosford City Masterplan has been referenced closely, he said.

The ADG vision for the waterfront would relocate Dane Dr (Central Cost Hwy) into an 800 metre underground, fourlane tunnel, beginning at the eastern end of Brian McGowan Bridge, allowing activation of pedestrian waterfront access. According to Mr Kelly, Dane Dr is the busiest road in Gosford. The 2010 Masterplan proposed traffi c calming measures i.e. to slow it down, with parking on both sides. “This would cause major disruptions to traffi c fl ow, particularly for commuters, and it also increases the width of the existing Dane Dr by 11 metres, posing an even greater problem for pedestrians and a disconnect to the waterfront,” Mr Kelly said.

The proposal includes the long-promised worldclass Performing Arts and Cultural Centre, which will feature a 1,000 seat concert hall, 500 seat theatre, two outdoor stages and 1,000 parking spaces. A grassed area for large outdoor events is also part of the new master plan, with a stage connected to the performing arts centre. In addition to the 1,000 parking spaces under the Performing Arts and Cultural Centre, a further 500 parking spaces would be made available under a Family/Active Precinct directly accessed from the Gosford City Bypass and City Centre.

The 2010 Masterplan saw the removal of most of the existing structures along the waterfront. “The ADG Architects plan includes retention of existing structures where possible for cost saving measures, such as the Iguana Joes building, which could be reworked into a Ferry Terminal connecting Brisbane Water communities.” Mr Kelly proposes converting the existing Iguana Joes building into a ferry terminal with rooftop bar, cafés and restaurants similar to a Manly Pier styled entry to Gosford from Woy Woy, Saratoga, Davistown, or further afi eld. The ADG Masterplan is designed to address issues from the 2010 Masterplan and provide a vision that connects communities. It proposes a new Point Clare Cycleway on the edge of the railway causeway linking the Waterfront via Point Clare to Woy Woy.

A cycleway and pedestrian path on the north side of the Brian McGowan Bridge would link West Gosford to the Stadium and Waterfront. A fl oating marina would be provided for small boats and family access to the waterfront. The landscaped waterfront area would reference local Indigenous themes and there would be a restaurant, café, bar and gallery precinct. An observation deck and lift would connect the waterfront and Poppy Park from the ANZAC memorial and Mann St. A water park could utilise the existing Gosford swimming pool and could include play equipment, small beaches and interactive water play. Underground parking for a further 500 cars and a bus pickup and drop-off area could link back into Gosford CBD.

“The enhancement of this Waterfront precinct will showcase our natural waterway environment and encourage tourism and employment,” Mr Kelly said. “The development of various eateries, cafes, restaurants, bars and galleries will create greater local employment. “It will add value to the DA approvals and future development of the Gosford CBD. “This will be an area for all members of the community to enjoy and create their own stories and memories. “We are currently discussing this plan with local and state authorities, stakeholders and community groups.

“It is an evolving plan taking on board suggestions and comments. “This will then be completed with proposed costings before Christmas as our 2016 Community Masterplan. “It will be an exceptionally collaborative approach and works in conjunction with the Central Coast Regional 2036 Plan which focuses on connecting communities.”

8,000 applications made for the Regional Seniors’ Card