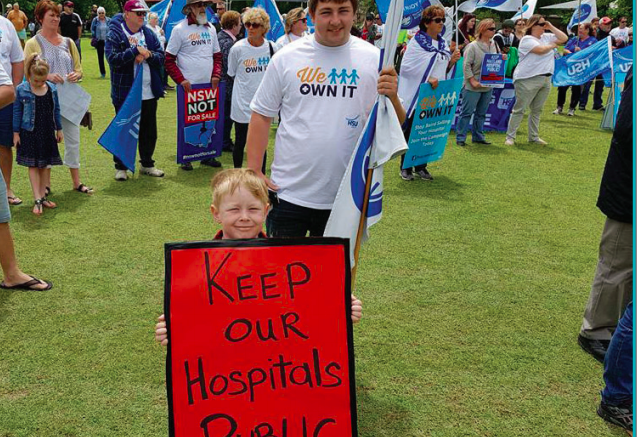 Opposition is galvanising across the state to the NSW Government’s plans to enter deals with the private sector to redevelop and operate public hospitals, including Wyong Hospital, according to Mr David Harris, NSW Shadow Minister for the Central Coast.

“Certainly opposition on the Coast is the strongest and the loudest,” Mr Harris said. Mr Harris said the NSW Minister for Health, Ms Jillian Skinner, was clearly out of touch with NSW Health if she was not aware that the department had been undertaking consultation in the foyer of the Wyong Hospital. “The consultation times and dates were advertised in the Express Advocate (but not in this newspaper) and I have had feedback from people who were there on Wednesday, November 16,” he said. According to Mr Harris, the consultation was conducted by representatives from NSW Health and they were unable to answer specific questions about, for example, future oncology services at the hospital. “Obviously they are there so they can tick the box to say they have spoken to people, but they can’t possibly know the detail until there is a firm expression of interest available,” Mr Harris said.

When asked if he could comment on Ms Skinner’s forecast that an arrangement like the Northern Beaches public-private partnership would save tax payers $1.5 billion over its life, Mr Harris said: “The government transfers all the staff to the new entity, all their entitlements get transferred over, so the government loses that liability.” He said one of the major concerns with the Government’s proposed model was its lack of transparency about whether those transferred jobs would be safe. In her interview with the Wyong Chronicle, Ms Skinner said the terms and conditions for any publicp r i v a t e – p a r t n e r s h i p at Wyong would be unique, including the detail of matters such as employment guarantees.

“This is all about transferring staff costs off the public books to make the government’s budget bottom line look better,” Mr Harris said. “As to job security, all we know is what they have done with the other sectors where privatisation has occurred, including in the power industry. “Employees are told they have a two-year guarantee, then they come to you and say ‘what is the job you do? “Sorry, we don’t have that job any more, you go and sit in that room and don’t do anything’, then they come back when you’re bored to death offering voluntary redundancies, and that is how, hand on heart, they can tell you they are not cutting jobs. “Nobody trusts their guarantees and that is why staff at Wyong are so upset; they know what is happening at Northern Beaches because they are talking to other nurses and they have seen what has happened in the power industry.

“All new staff that come in can be on a different rate of pay doing the same job because they don’t have the same protection. “This is a really complex thing and all we are saying is get it out there in the public domain and let the public decide whether it is a good deal or bad deal.” According to the NSW Opposition, rather than saving taxpayer money, servicing public patients under the proposed arrangement could end up costing the government more. “Ms Skinner can say public patients won’t pay anything but we know with the Northern Beaches Hospital that there are two entry pathways, one for private care and one for public. “A private operator gets guaranteed an average cost per public patient that is always higher than what a public hospital would be paid by the government for providing the same care.

“That is the only way a private operator can make a profi t out of providing public patient care. “I am going to call for the NSW Auditor General to look at and compare the costs of a public-private agreement proposal against what it would cost if the hospital stayed in public hands before any contract is signed. “The only way a private operator can make money is if the government pays them over the rate it actually takes to service a patient. “The hospital currently does not make a profi t and one of the key things the doctors and nurses have said is that the most expensive part of the hospital is emergency because emergency medicine is very expensive.

“Wyong is seeing over 200 patients a day through emergency and, within the structure of a public hospital, other service areas are cheaper to run so the budget can cover emergency care. “I question whether a private operator would allow profi table areas of its operation to crosssubsidise more expensive ones.” He said he questioned whether Wyong was a lucrative location for any private health provider given that only 17 per cent of people in Wyong have private health insurance. As for Ms Skinner’s vision for Wyong Hospital to offer the full range of maternity services, Mr Harris said the hospital already has full maternity facilities, funded and built under Labor. “Wyong could have a full maternity hospital now but they can’t get obstetricians, they might get a maternity ward but there would be private obstetricians in there which would mean it would be for private patients. “We built the maternity ward but had to scale it back to the midwifery model because they can’t staff it, that is the issue,” he said.