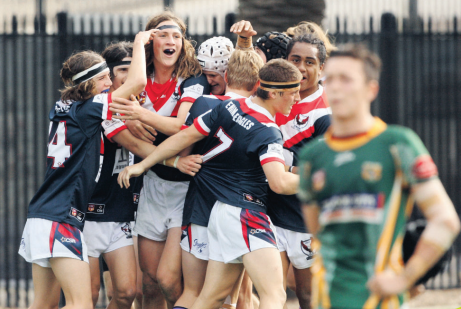 Erina proved to be the big winners for 2016, notching three division one premierships, and managed to overshadow traditional powerhouse club The Entrance, who were restricted to two. The U10(1)s kicked off Erina’s red letter weekend by edging out the Tigers 12-10 at Kanwal, with their talented, organising half, Jesse Walker, being awarded player of the match.

The following day saw the Eagles U13(1)s shoot out to a 24-6 halftime lead before having to withstand a keen Terrigal revival. The Sharks got back within eight before Erina finished strongly, recording a fi ne 36-22 victory. Eagles skipper, Leo Elton, worked tirelessly throughout, while halfback, Max Anderson’s, kicking game was superb. Right edge second rower, Cooper Turner, and fullback, Jonah Underwood, also caught the eye and were a constant threat to the Sharks defence. Terrigal fi ve eighth, Viliama Liga, produced some nice touches for the runners up, including a backhanded offl oad to back rower, Wiremu Tibbutt, which led to a slick second half try.

The Eagles were able to notch their third premiership of the weekend when their U16(1)s won a duel with minor premiers Wyong. In a game that featured more free flowing hair than Woodstock, the tricolours were able to fi ght back from a 12-4 halftime defi cit, before overrunning the Roos 28-18. A hat-trick of tries to Erina fi ve eighth, Jack Frasca, all three of which were scored during the games frenetic final quarter hour, ensured that the John Shanny Family Trophy would be heading towards the Karalta Rd roundabout. Gosford Kariong, resplendent in their bright yellow RU OK socks, were defeated 28-22 by Woy Woy in an exciting U10(2)s grand fi nal having trailed 18-10 at halftime. The Storm struggled to get an even share of possession through the game’s middle period.

However, despite completing a mountain of tackling, they fi nished very strongly. Dynamic dummy half, Benji Keene-O’Keefe crossed for yet another hattrick of tries, pushing his season’s tally to 43 tries in just 14 games. Lorenzo Godoy, Blake Hodge and Matt Le Maistre toiled manfully for the runners up while Sean Bullen and former Storm player, Bailey Chislett, were outstanding for the Roosters. Two tries in the opening seven minutes set the tone for the U14(1)s grand fi nal as Kincumber accounted for Ourimbah 32-6. Fleet footed Colts; Sandon Smith, Bowen Foreshew and Phoenix Steinwede, drove the Magpies spare as the Reds ran riot, crossing for six tries to one.

The Terrigal Sharks U17(1)s provided the fairy tale finish of the day in defeating the previously unbeaten Tigers 24-22, with a try inside the last four minutes. Trailing 16-4 at the break and 22-18 late in the game, the underdogs fi nished with the greater purpose, the match winning try coming via a nice offl oad from cocaptain, Toby Bowditch, which enabled smart number six, Sam Collett, to spear over beside the right hand upright. Elih Jackson was a standout in tight for the Sharks, while talented Tigers custodian, Blake Taaffe, provided a constant attacking threat out wide. Both sides were playing their fi nal year of junior football, with The Entrance team having won back to back premierships in 2014 and 2015 while the Sharks had never previously won a competition. It was a high quality game that produced a spine tingling fi nish.

The popular result provided a fitting way in which to bring down the curtain on a bumper 2016 junior rugby league season. In other local results, Kincumber proved too strong for Umina in the U11(4)s winning 22-6, the Terrigal U11(1)s fought back from an early 12-0 defi cit before falling 18-12 to The Entrance. The Colts U13(2)s were eclipsed 36-0 by the Magpies, U15(3)s minor premiers Erina were upset 20-4 by Northern Lakes, the Kincumber U12(1)s ran headlong into a white hot Tigers side, suffering a 50-0 defeat, while the Terrigal U15(2)s beat Berkeley Vale 12-10 having managed to traverse a month of tough knock out semi-fi nals, a hectic campaign that saw the Sharks defeat Gosford, Warnervale and Wyong, before edging out the Panthers in the decider.