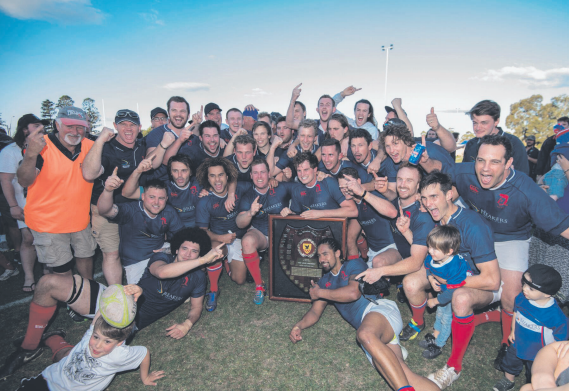 The Terrigal Trojans secured the Premier 1 Premiership when they defeated Avoca Beach by 29 points to 19, in a match played before a record breaking crowd at Woy Woy Oval on September 10.

The match was set to ideal conditions, and in true Grand Final style, no quarter was given or asked for from either side. Both sides had short bursts of attack thanks to equally solid defences. Generally, the play was proving quite physical with some tough tackling taking place at the breakdown.

Avoca Beach had the advantage of a slight gusty breeze in the fi rst half and they did make good use of it. Even though Avoca Beach did dominate territory and possession for much of the fi rst half, they were not to be rewarded with points on the scoreboard. In fact, it was during one of these periods of Avoca Beach attack that a loose ball was scooped up by Terrigal prop, Todd Atkins, only 20 meters from his own try line.

Atkins took it forward before passing it to fl ying winger, Dan Sargeant, who raced 70 meters to score. The conversion of this try by fi ve-eight, Aaron Tait, had taken Terrigal to an opening lead of 7 points to nil at the fi ve minute mark of the match. It was just the start that Terrigal wanted. However, it was Avoca Beach again who were soon back onto the attack, but they simply could not post points. Terrigal went further ahead in the 24th minute when centre, Tom Lowe, took good ball from a maul to cross for their second try. Terrigal had jumped to a handy 12 points to nil lead.

Finally, nearing halftime, Avoca Beach was rewarded with a good try. Following a strong scrum close to the line, halfback, Damon Boxsell, raced across for a try untouched. The conversion by fullback, Nathan Brown, had narrowed the score to 12 points to 7. Terrigal did receive a penalty goal right on halftime so they went to the halftime break leading by 15 points to 7. It was proving to be a most intense game of rugby. There were errors from both teams but it was the intensity of the match and the toughness of the defence that were forcing these. Both teams had some really good players.

The standouts for Terrigal in the fi rst half were prop, Nathan Simpson, who was in everything at the breakdown. His fellow front row partner, hooker, Ethan McInnes, was always there with him. These two players were certainly laying the foundation for the Terrigal team’s efforts up front. Others to play well were centre, Mitch Hirst, fl anker, Sam Kenny, and winger, Dan Sargeant. Avoca Beach certainly had a very good fi rst half and based on territory controlled, may have deserved to lead in the match at that stage. Their best players were hooker, Josh Meadham, flanker, Chad Martin, halfback, Damon Boxsell, and centre, Matt Anderson. Terrigal jumped further ahead on the scoreboard early in the second half when they scored their third try in the seventh minute of the second half.

Replacement back, Alec Herridge, made a strong run and scored a most effective try in the corner. A great conversion from near touch of his own try saw Terrigal hold a comfortable 22 points to 7 lead in the Grand Final. However, just two minutes after Herridge’s try, Avoca Beach fi ve-eight, Julian Bacigalupo, charged down a Terrigal clearing kick, regathered and scored wide out. The very good conversion from near touch by Nathan Brown suddenly saw Avoca Beach back into the match with the score line Terrigal 22 and Avoca Beach 14. Interest in the match turned to fever pitch after this. Avoca Beach scored a second very quick try and suddenly the match was all up for grabs once again.

At the 13th minute, Avoca Beach winger, Mitch Jacob, fi nished off a backline move to score wide out. With the score in the match now 22 points to 19, still with 25 minutes to go, the match was entering into a most exciting fi nal homestretch. There was no scoring for the next 15 minutes, with both teams throwing everything at each other in an attempt to get the breakthrough. Terrigal almost scored in the corner but the try was disallowed, and then Avoca Beach responded with a series of raids. It was in the 28th minute of the second half that there was some relief for Terrigal fans. Flanker, Ryan Metcalfe, followed up a maul close to the line to cross for a vital fourth try for his team.

The conversion took Terrigal to a 10 point lead of 29 points to 19. There was to be no more scoring in the match but there was certainly plenty of excitement and action in those fi nal 10 minutes. A Premiership was up for grabs. However, the Terrigal team was able to hang on and win the 2016 Premier 1 Premiership with the 29 points to 19 victory. Terrigal had become Major Premiers, as well as Minor Premiers, to record what was a wonderful year for them. Both Terrigal and Avoca Beach had put on a classic Grand Final, and the 2016 Grand Final will go down as one of the great occasions in Central Coast Rugby.