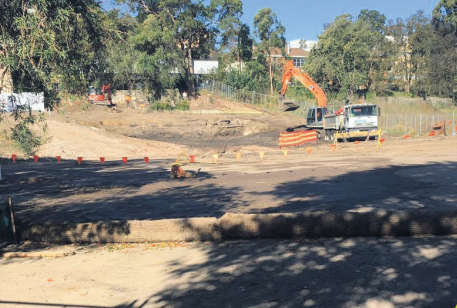 The site of the DomaTax Offi ce development in Gosford

Gosford Waterfront Alliance Inc (GWA) has announced it will commence proceedings in the NSW Land and Environment Court to challenge the development consent to build an Australian Taxation Office (ATO) on the former Gosford Public School site.

The consent to proceed was given by the Central Coast Joint Regional Planning Panel (JRPP) on June 30. The Alliance will seek a declaration that the consent is legally fl awed to the extent that it cannot be allowed to stand. This follows pro bono advice received from Mr Matthew Fraser, a barrister who specialises in judicial challenges in the Land and Environment Court. Mr Fraser acted for the residents opposed to the demolition of the old Windsor Bridge, on heritage grounds.

President of the Gosford Waterfront Alliance (GWA), Ms Claire Braund, said a challenge had to be mounted as the ATO development represented a signifi cant underuse of the former Gosford Public School site. “We have a prime location at the apex of Brisbane Water that could be a thriving and integrated cultural, recreational and tourism precinct,” Ms Braund said. “Instead we get a modest box-like ATO offi ce building with tight security specifi cations that make it far more suited to other locations in the CBD,” she said. “People may not be aware that the current plan is for a row of blank shopfront windows at ground level.”

Ms Braund said the blank ground fl oor windows did not meet the condition imposed by the JRPP that: “The Georgiana Terrace and Baker Street frontages shall retain an open and active street frontage”. “If the Federal Government is serious about delivering jobs and growth to Gosford, it would buy an appropriate site and develop it accordingly, not rely on a cheap land deal from the NSW Government,” she said. Ms Braund said the Alliance was a group of progressive community and business people seeking to defend the city against poor planning practice.

“GWA Inc is committed to working with the future Central Coast Council, which we trust will be elected early next year, to defend the vision for Gosford outlined in the 2010 Our City, Our Destiny Masterplan,” Ms Braund said. “We need a strong planning document that reduces the potential for conflict and contention and creates a real vision for the future.” Ms Braund said GWA Inc. would lodge a challenge in the NSW Land and Environment Court before the end of August. Courtesy letters outlining the intention to challenge have been sent to the CEO and administrator of Central Coast Council and the developers. The Alliance has also opened another front in its campaign to keep the waterfront in community hands by raising public awareness of the proposed changes to Leagues Club Park. According to Ms Braund, the park will be reduced by about an acre with the imminent development of the ATO and proposed State Finance Office.

“The access road for both buildings is an extension of Baker St, which will run between Georgiana Tce and Central Coast Hwy, right through the football fi elds, park amenities, fl ood lights and established trees,” she said. “In total, 4800 square metres will be lost.” According to Ms Braund, the park is heavily used by sports clubs, schools, visiting performance groups and for celebrations such as New Year’s Eve. “What this does is surround the park by roads, which will make it less safe as a recreation space for families and community members. “This is a further erosion of the public lands on the waterfront in particular, when there are other spaces in the CBD for offi ce blocks.”

Ms Braund reiterated that GWA Inc is very much pro the regeneration of Gosford and has no objection to the ATO and NSW Finance Office buildings and the employment they will bring. “However, these offi ces should rightfully be built in the Central Business District and close to the railway station not on our iconic waterfront.”

On August 5, the shadow minister for the Central Coast, Mr David Harris, gave notice of a motion to the NSW Parliament to call on the Baird Government to immediately suspend the sale of the remainder of the former Gosford Public School site and commit to building the promised performing arts centre as indicated in the Our City, Our Destiny Master Plan.

“The Baird Government has failed to listen to the concerns of our community,” Mr Harris said. “Instead they are holding us to ransom.” He said the master plan was the product of two years of community consultation that the Baird Government had ignored because the government had a “money driven agenda” for the old school site. He also called on the member for Terrigal, Mr Adam Crouch, to read the master plan before making incorrect public comments.