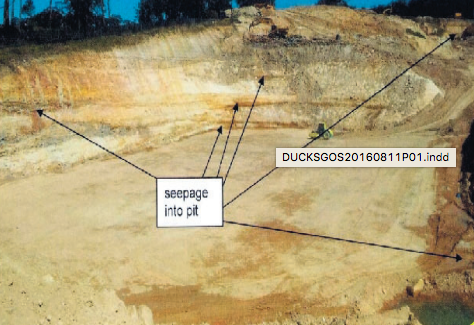 Documents obtained by the Mountain Districts Association from the NSW Office of Water, show the landfill at Mangrove Mountain has flouted legal requirements necessary to protect natural water resources, since at least 2005.

The association used the Government Information (Public Access) Act 2009 to access documents that tell a damning story of malfeasance by two landfill operators, the Gosford Council and the NSW Environmental Protection Authority, in relation to their responsibility to keep the Central Coast’s water supply safe. The documents show that officers from the NSW Office of Water, within the Department of Primary Industries (and its former equivalents), have been raising concerns about the operation of the landfi ll for at least 10 years (2005 to 2015). Despite concerns raised by the Office of Water, Gosford Council, as consent authority, and the EPA as the licencing authority, continued to allow the landfill to operate. The Mountain Districts Association has been requesting a meeting with the former Gosford Council, and the new Central Coast Council, since January 2016.

The new Central Coast Council has finally agreed to meet with the Mountain Districts Association on August 23 to discuss the landfi ll. The EPA, although it has agreed to an independent review of the landfill’s operations, continues to work with the operator to apply new licencing conditions which would allow the site to recommence taking waste. The EPA has informed the Mountain Districts Association that, during the week from August 1 to 5, the EPA and Office of Water met the landfi ll operator at the site to again discuss water licencing and approvals. The GIPA documents outlining past failures to deal with water licencing and approvals are extensive and detailed.

This article includes only key points in the documents, but the facts uncovered support the Mountain Districts Association’s call for a full commission of inquiry by the NSW Government, the immediate closure of the landfill and full remediation of the site.

Documents from 2012 to 2015 relate to future activities proposed at the landfill if the EPA issues new licencing conditions. The most recent document from the Office of Water was dated September 2015, following an inspection of the landfill site by officers which confirmed recent construction work undertaken to reshape a sediment dam wall and construct a new spillway. “Recent works are not to an acceptable standard and likely to fail,” the document said. This work was subject to the Land and Environment Court Consent of 2012 but, according to the document, had been carried out without Controlled Activity Approval being granted by the Office of Water.

In January 2014 the Offi ce of Water commented that proposals for groundwater monitoring at the site were unsatisfactory. According to the report: “It appears that no formal …review has been required to consider the potential groundwater impacts of this development. “The nature of the activity, and the magnitude and sensitivity of the location warrant an assessment of the potential impacts against the Aquifer Interference Policy ‘minimal impact considerations’, should the development proceed [under yet-to-be fi nalised new EPA licencing conditions],” the document said.
In terms of whether the existing landfi ll has had any impact on groundwater, an August 2012 site inspection by the Offi ce of Water concluded: “Evidence gathered onsite indicates that the groundwater table has been intercepted by excavation with seepages noted up to approximately half the height of the pit. “Inspection of the river and the waterfront land along the northern boundary indicates signifi cant harm caused by sedimentation and uncontrolled runoff. “The wall of the basin appears likely to fail and cause additional major harm to the river. “Leechate seepage entering surface water stormwater drains indicates high potential for contamination of surface waters and groundwaters.”
The officer who completed the site inspection recommended immediate compliance action for the extraction of groundwater, damage to waterfront land and to refuse an application for controlled activity approval. The “waterfront” referred to was described by the Office of Water as “forming part of the headwaters of the Wyong River”. The landfill operator (Verde Terra) responded by supplying the Office of Water with information that Gosford Council had granted a Section 96 amendment to its original development consent and an addendum to a Landfill Environmental Management Plan. Verde Terra was told they had no consent under the Water Management Act 2000 to undertake proposed works. 2012 According to the Office of Water documents, Gosford Council did not express concerns to the Office of Water about the landfill’s activities being potentially in breach of its development consent until August 2012. The years 2011 and 2012 represented a period of heightened correspondence between the Office of Water, Gosford Council and the landfill operator.