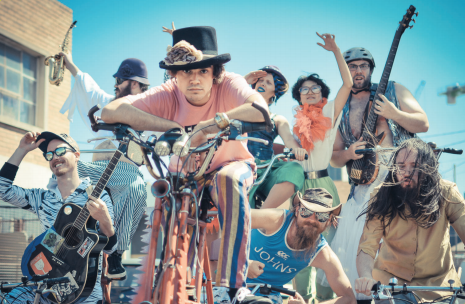 Performances on the night include the psychedelic gypsy carniehop band, Ungus Ungus Ungus. They will take you on a journey of dance and mayhem. Referencing klezmer and Balkan music and traversing territory from hip-hop to rock and jazz, this is carnivalesque party music for the creatively inclined, featuring dancer Niki Shi’s vaudevillian fusion of contemporary, classical, and folkloric performance styles.

They released their debut album, Urcheon in February 2015 and have been touring from Byron bay to Melbourne, performing with the likes of The Crooked Fiddle Band, Afenginn, The Dead Maggies, The Button Collective, Rhythm Hunters and The Squeezebox Trio.

Live performances feature narrative driven songs that bounce between being playful, harrowing and ethereal, producing moments for dancing, internal reflection and escaping to other dimensions.

The Rhythm Hut has holiday activities with a difference

Book launch at The Rhythm Hut