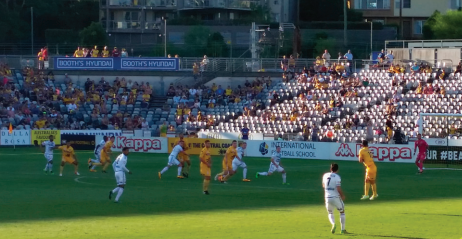 The promise of a season of entertaining, attacking football has turned into a train wreck for the Central Coast Mariners with yet another loss at home on Sunday, March 6.

Even days before kickoff, Mariners’ fans were questioning coach Tony Walmsley’s decision not to select the promising Trent Buhagiar for the game against Melbourne Victory when the International Football School youngster had performed so well against the Newcastle Jets a week earlier.

Roy O’Donovan returned from his eight-week suspension and Ferreira was also back in the frame, so Walmsley obviously has some sort of rotation system in place for his young upand-comers that meant Buhagiar was not selected in the starting 11 or on the bench.

Over 5,000 faithful Central Coast Mariners fans turned up in the heat to cheer their team on, even though the team’s position at the bottom of the 2015-16 A-League table now appears set in stone – the Central Coast Mariners had fallen from once-proud winners of the toilet seat to inevitable holders of this year’s toilet brush.

Melbourne Victory have not been in the best form lately either, so their main challenge was to secure the three points to stay in the top six and rediscover their own tempo and mojo. O’Donovan re-entered the fray with a free kick in the opening minutes of the Mariners’ match against Melbourne Victory but it that was off target (too high).

Most of the Mariners’ attacking chances throughout the first half came via captain for the day Fabio Ferreira, who took his first bounding run down the left sideline within the first five minutes. Melbourne Victory’s danger player for the match Fahid Khalfallah also made his mark in the opening minutes.

Tom Uskok was given the unenviable job of defending Victory’s go-to striker Besart Berisha. Mitchell Neill picked up a yellow card on the sixth minute, giving Melbourne a free kick well-within striking range that was taken by Guilherme Finkler, but deflected by Luis Garcia.

The resulting Melbourne Victory corner kick didn’t create another scoring opportunity but they were able to keep possession. On the 12th minute, the home side’s brass band was silenced. Melbourne Victory showed the crowd the meaning of style when Delpierre delivered a pinpoint pass onto the foot of Ingham whose first-touch cross enabled Berisha to polish it off with a clinical goal.

Luis Garcia took a corner kick for the home side on minute 13 that connected with the boot of Liam Rose but he sent it wide and high and was visibly disappointed by his own efforts. Melbourne Victory continued their strategy of accurate passing and maintaining possession.

At around the 15-minute mark the Mariners had a glimpse of attacking momentum delivered by Ferreira and Ascroft but there was no resulting goal attempt. Victory delivered a speedy counter attack and Berisha maneuvered into a dangerous position, but fumbled and the Mariners defenders maintained their composure.

Minutes later the Mariners appeared to have an attacking opportunity via their right hand flank but an unsuccessful attempt to cross the ball to the left gave Melbourne a throw in. A clear Melbourne Victory hand ball went unnoticed and they continued to dominate possession, with the Mariners winning the ball at times but giving it up just as quickly.

A yellow card to Thomas Deng gave the Mariners a free kick. It was taken short but quickly picked up by Melbourne’s defenders.

The Mariners had another glimpse of dangerous attacking form down the centre of the field at around the 24th minute with a ball that Victory’s keeper was forced to kick out. Tom Uskok managed to keep Berisha under control for the remainder of the first half but Victory started to look like they were toying with the Mariners from the 30th minute.

Luis Garcia took a free kick on the 25th minute, but it was delivered directly to the keeper. Shortly after Luis Garcia was given a yellow card. Neither side was playing attractive football apart from occasional classy one-touch passing from the Victory.

Neill, Austin and Liam Rose combined forces on the 30-minute mark to put together a great attack down the left hand side of the field but, again, the shot was well off target. O’Donovan was fed another scoring opportunity via Ferreira and Ascroft within minutes, but his attempt to head the ball failed. Shortly after, the Victory’s mid-field fed the ball to Berisha, but Mariners’ defenders didn’t allow him to get into a scoring position.

The next five minutes was dominated by Melbourne Victory, including two corner kicks, but no goal. Mitchell Austin was replaced by Bradley McDonald for the Central Coast Mariners at minute 35. Luis Garcia attempted a shot at minute 39 that was wide and off target.

The home side looked a bit sharper during the last five minutes of the first half and had their most promising period of attack. A foul by the Victory’s Jai Ingham gave the Mariners a free kick, but Victory recovered the ball. Bradley McDonald attempted an impressive run for the Mariners and managed to cross the ball to O’Donovan within striking range; he attempted a header, but was beaten to the ball by a Victory defender.

Finkler made one final attacking run for the Victory and they had one more corner before half-time. The opening minutes of the second half quickly became a nightmare for the Mariners when Mitchell Neill was given his second yellow card and sent from the field – another 10-man struggle in front of a home crowd was not what the Mariners were looking for.

Their traditional disciplinary record was in tatters. Fortunately, Garcia took the full force of the Victory free kick, so Neill’s red card did not lead directly to the visitors’ second goal. A Central Coast Mariners’ goal kick was deflected by Berisha at minute 48 and the home team was almost in even deeper trouble.

Walmsley made his second substitution at the 50 minute mark, replacing Liam Rose with Jacob Poscoliero. The Mariners just about parked the bus at the 50-minute mark as their attacking options appeared to diminish, despite the efforts of players like Brad McDonald and the ongoing fight of Fabio Ferreira.

O’Donovan looked deserted on half way for significant patches of play. Waves of attack continued from the visitors and a clever little back pass from Jai Ingham again gave Berisha a scoring opportunity, kept at bay by the Mariners’ defence.

Izzo was able to deflect another Berisha move on goal. The visitors looked like they were in practice drill mode for the last 30 minutes,. Poscoliero was applying good pressure and playing his heart out, but Melbourne Victory were able to dominate possession and the Mariners kept sitting deeper in defence.

The yellow submarine was taking on water fast: McDonald, Poscoliero and McGing all had moments of gutsy play, but the home side’s binding strategy was difficult to fathom. Berisha had a great chance to score, something he would usually have netted easily, but he was significantly off target, an indicator that neither side was at their finest.

The Mariners started to resort to the long ball, but no one was in a position to connect. O’Donovan was trying to earn his keep after his costly eight-week ban, but as the clock ticked down, he didn’t have the needed support. He was given a yellow card at around minute 64.

Izzo made a double save at around minute 67 to keep the Victory from their second goal, but their attacking seemed relentless. Berisha was taken off at minute 68 and replaced by Archie Thompson. Garcia and Ferreira attempted to keep the home side’s hopes alive until Luis was substituted for Bingham at minute 77 and Ferreira looked out on his feet.

Josh Bingham attempted to make his mark late in the game but found little support. Then, in the final minute of ordinary time, the killer blow came from Khalfallah, set up by Jai Ingham and veteran Archie Thompson, and the Mariners were sunk, to struggle through three long minutes of extra time.

“We needed to execute much better in the second half, even down to 10 men,” Mariners’ coach Tony Walmsley said at the conclusion of the match. “O’Donovan had a great chance in the first half, it was quick thinking, well executed and it’s a different game if that goes in,” he said.

“Poscoliero did a great job when he came on and the reason he didn’t start was because we defended well last week and we gave the same back four an opportunity to repeat. “For me there were far too many yellow cards, I can’t defend the disciplinary record that we’ve got, but there was no need for anyone to be sent off that pitch today.

“It was a tough afternoon, we played too many balls down Delpierre’s throat, he’s the biggest guy on the field and a classy defender. “Our pass selection was way off the mark today. “If it had of been better, I think we could have tamed Victory, because with 20 minutes to go, they were gone, but we didn’t execute well enough,” Walmsley said.