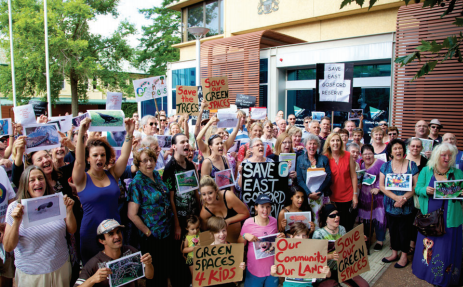 Some of the protesters outside Gosford Council Chambers

Gosford councillors have voted against a motion that would have saved five parcels of community land from potential reclassification and sale.

The motion was moved by Cr Vicki Scott and seconded by Cr Hillary Morris at the Gosford Council meeting on Tuesday, February 9. The vote followed a demonstration outside council chambers which was attended by around 200 people.

Demonstrators then filled the public seating in the council chamber and those who could not fit assembled in a nearby room. Some pinned colour photos of their local reserve to their chests as they were not permitted to take signs into the meeting. Five members of the public were given special permission to speak and all spoke in favour of the motion.

Cr Scott and Cr Morris also tabled petitions with 1,500 signatures calling for Gosford Council to reconsider its land sale strategy. In front of the packed public gallery and after an extensive debate, only three councillors (Scott, Morris and McFadyen) voted for the motion.

Mr Phil Conacher, a third generation East Gosford local said: “Public reserves should be and must be retained in public ownership for public purposes; we should be outside enjoying them now, not inside fighting for them.”

He identified a council sign at one reserve that said “Trees, the lungs of our community” and argued that the reserves listed for reclassification and sale were identified as important in the council’s own climate change policy.

“Please leave the lungs of our community intact,” he said. Ms Heidi Cantor spoke in favour of the withdrawal of a reserve at 13 Winter Cl, Lisarow from the list, arguing it was provided to the community by a developer.

Mr Richard Wells spoke on behalf of the Wamberal Action Group about the Benjamin Parker Reserve’s stunning views over Terrigal, its history dating back to the 1830s. He said such reserves “were not donated to be used as blank cheques” by council. Mr Bruce McAlpine described the reserve at 2 Eagle Cl, Lisarow as “home to 66 trees, magnificent in stature and age”.

Ms Sue Chidgey, organiser of the Save Central Coast Reserves campaign, with a photo of East Gosford Reserve pinned to her chest, thanked Gosford mayor Cr Lawrie McKinna for allowing five speakers. “The sites are valued by the communities who live around them,” Ms Chidgey said.

“The community should have been consulted first, not later on, in the process,” she said. “At no point has council formally advised us of how the lots were placed on the list [for reclassification and sale].” “These communities do not give their consent to the sell off of their community land,” she concluded.

During the debate, council’s director of community growth, Ms Judy Jaeger said there would be opportunities for community consultation. Ms Jaeger said she was “very keen on following an open process”. She said councillors had already resolved to consider 31 lots of community land for reclassification and sale and had since appointed a consultant to examine each lot and prepare a report that will form the basis of a public hearing.

The community will be given 28 days’ notice of the hearing and will be able to register to speak or make written submissions. The consultant will then prepare a report which will be considered by a subsequent council meeting.

If this council does reclassify any community land, it will then have to go through a development proposal gateway process, which will include another opportunity for community consultation.

Cr Scott said the community had already spoken and that a consultant was not needed to know that at least the five blocks her motion listed had significant value to the community.

“Some Councillors and Council staff highlighted that the community would now have three opportunities to make submissions, however, this process shows contempt for the community’s input,” Ms Chidgey said following the meeting.

“To now force residents to take time away from their families and jobs to go through a long, drawn out process shows a complete disregard for the community,”, said Jane Smith from CEN.