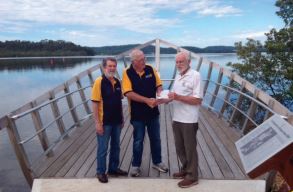 Brisbane Water Marine Watch has donated $1,000 to Kincumber Rotary to go towards the funding of the ship builder’s memorial on the foreshore at Kincumber.

Marine Watch treasurer, Mr John Burnet presented the $1,000 cheque to Mr Graeme Davies and Mr Eric Perrott, past Kincumber Rotary presidents. The contribution is for the Brisbane Water Boatbuilders Memorial which was recently opened on the Broadwater in Kincumber.

Deputy president of Brisbane Water Marine Watch, Mr Gus Plater said: “Marine watch… is a volunteer organisation with similar responsibilities to a neighbourhood watch which concentrates on waterborn activities, safety and security around Brisbane Water.” Mr Plater said the organisation had some surplus funds and decided the ship builders’ memorial was a project worthy of donations.