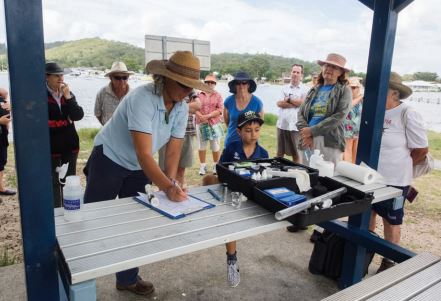 Participants heard talks about the local wetlands as well as the animals that abound within them and also took part in other activities, including dip-netting for water-bugs and a short tour of the local wetlands. World Wetlands Day is celebrated on February 2 each year and marks the anniversary of the signing of the convention on wetlands in Ramsar, Iran in 1971.

World Wetlands Day was first celebrated in 1997. The international theme for World Wetlands Day 2016 is Wetlands for Our Future: Sustainable Livelihoods. Mr Alan Kwok of CEN said: “Wetlands are critical to the healthy functioning of ecosystems, and their proper management can yield substantial ecological, financial and social benefits.

“The Central Coast is fortunate to have a variety of wetland systems very close to urban areas. “These systems are regionally unique for a variety of reasons, and are home to a wide range of animals and plants, many of which are completely dependent upon wetland areas.

“The health of these systems and the life within them can be affected by what we do around our homes, and so it is important to understand the impacts of our everyday practices on them.” Ms Samantha Willis of CEN and Ms Anna Deegan, Gosford Council bushcare officer, delivered talks about the management and monitoring of local wetlands and waterways and Mr Kwok delivered a talk on the lesser known creatures that live in urban areas.

The talks were followed by a demonstration by Ms Nicole Heta of CEN on how water monitoring can be conducted by the general public and an info-tour of the nearby wetlands by local ecologist, Mr Robert Payne.

CEN ran the breakfast event in Davistown to help raise awareness of wetlands on the Central Coast and the animals that depend on them.

Workforce at Central Coast Council to be slashed by 242

Gosford waterfront upgrade back on the agenda