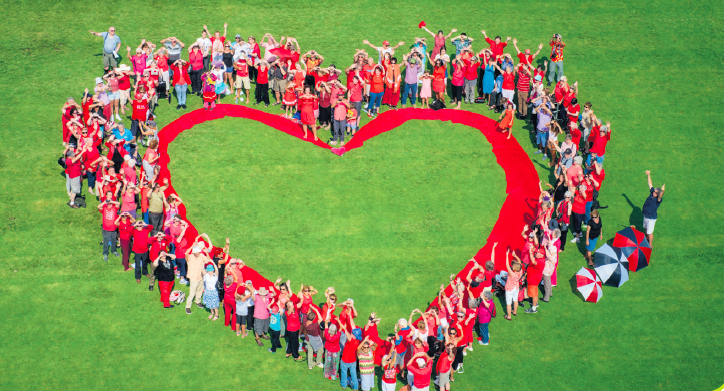 Demonstrators in 2106 form a heart to symbolise Gosford’s need for a cultural focus on waterfront park.

Over two hundred Gosford residents attended a rally on Sunday, January 24 to continue to campaign for a performing arts precinct on the site of the former Gosford Public School.

Multi Arts Confederation vice president Ms Victoria (Fi) Hopkins said the “common denominator” for those gathered was “misinformation, back door deals and a lack of consultation with the community” from all levels of government. “The catalyst for the rally was the demolition of Gosford Public School on the promise of a Regional Performing Arts Cultural Precinct to be built in its place,” Ms Hopkins said.

“However, the Liberal party announced last year that the Australian Tax Office will be built in the prime position,” she said. “The community categorically does not agree with anything other than a Regional Performing Arts Cultural Precinct on the earmarked former Gosford Public school site. “

We do not agree with a sterile office building being built on this site. “As the vice president of MAC, advocate for the arts and a concerned citizen of Gosford, I am in favour of development in Gosford which takes into account all aspects of community design, and development which at its core, benefi ts tourism and the economy. “I am also very concerned at the broken promises and ask the Liberal Party to honour the people of Gosford and build a Regional Performing Arts Cultural Precinct on this site and no other.

“There is a threat of our crown land being seized for development and a lot of people see that it may not be in the best interests of the people of the Central Coast. “It seems to have a lot more to do with developers’ interests and government interests.” Ms Hopkins said it was great for groups like FOPAP that all three levels of government have now committed to fund a performing arts centre but that was only for an expansion of the Coast Conservatorium of Music and a concert hall. “A cultural heart is more of an arts and performance and entertainment precinct there on the school site; that is what the community was promised through the Gosford Challenge.

“A lot could be resolved if there was a clearer answer to why we were told there was going to be a performing arts centre and then ended up with a tax offi ce. “Everyone is saying there is a lack of consultation and a lot of decision making behind closed doors.” In response to suggestions that the performing arts precinct could be integrated into the triple tower Waterside development that has been approved for the opposite corner of Mann St and Georgiana Tce, Ms Hopkins said: “I think unfortunately shoving it somewhere where it could have the potential to disappear into a private developer’s building means we might be at risk of losing it altogether because the community has no say about what goes on in a privately-owned building.

“Working at Gosford station, I see people leaving early in the morning to work Monday to Friday, and on the weekends they leave Gosford because there is nothing here to make them stay. “Gosford needs to be supported and that could be achieved through the arts. “A precinct on the waterfront could attract touring companies. “In my mind it is a no brainer, it can be selffunding and can attract businesses around it.” Ms Hopkins said the next community event will take place on February 14.