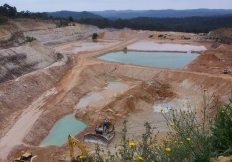 Darkinjung Local Aboriginal Land Council (LALC) has acknowledged its long standing objection to the extension of the Calga Sand Quarry has been put to rest with the Land and Environment Court refusing Rocla’s proposed sand mine expansion.

In early 2013, Darkinjung LALC formally lodged an objection to the proposed extension stating that the desired expansion area was rich in Aboriginal cultural significance and heritage.

The ruling marks almost 10 years since the application to expand was first submitted and after being actively engaged with this process for many years, Darkinjung is thrilled with the outcome of the landmark Land and Environment Court hearing.

Darkinjung chief executive officer, Mr Sean Gordon said, this has been a very long journey for the Land Council. “We have been involved in the proposed Development Application process for almost a decade now, and in that time, we have conducted numerous surveys of the site and night recordings.

“Ultimately, we have been able to identify that this area is immensely important for Aboriginal people and also contains significant Aboriginal artefacts and objects,” Mr Gordon said.

Darkinjung chairperson, Ms Tina West said, they are ecstatic with the outcome and are incredibly proud of the hard work and dedication of not only the Land Council, but also the local community over the years.

“Decisions such as this highlight just how strong our voice is and how committed we are to protecting our land and the Aboriginal history of the Central Coast,” Ms West said. The decision comes as a major win for Darkinjung, the local community and for Aboriginal people across the country.

The Court has accepted and understood that Aboriginal cultural heritage is not to be understood in isolation but is part of a cultural landscape. The Court noted that the “physical aspects of a site (in this case the engraved fi gures and stone arrangement) should not be considered in isolation, but in association with its surrounding spiritual, cultural and physical environment”.

The Court also noted that “there is convincing evidence which indicates interrelatedness of the elements of the cultural landscape within and around Rocla land.”

“Out of everything that Darkinjung has fought for over the years and in particular during my time with the Land Council, I believe this is by far the biggest outcome and achievement. “This decision has potentially set a new benchmark for how development applications are reviewed.

To have the cultural landscape of an area taken into consideration rather than just having them assessed in isolation is a major feat for us,” Mr Gordon said. The basis of the refusal of the development application was primarily due to the inadequacies of the surveys that had been undertaken by Rocla.

The known heritage in the area and the likelihood of other cultural heritage was seen as an unacceptable risk which led to the refusal of the proposal. “The Central Coast has a proud and extensive cultural fabric and we are elated to have won this case and to have fought to keep it this way,” Mr Gordon said.