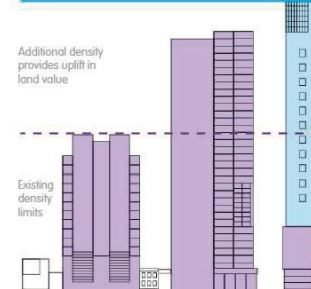 Change in density limits allowed by the incentive clause

Additional incentives will be offered to developers to further encourage the revitalisation of Gosford’s core commercial area.

Gosford Council has discussed a planning proposal that includes rezoning certain parcels of land in the CBD and providing new floor space and height incentives for projects zoned B3 Commercial Core.

A limited pool of additional floor space will be made available within the B3 Commercial Core zone subject to minimum site area, frontage, design criteria and provision of public benefit.

The zones in question are currently bounded by Faunce St, Henry Parry Dve, Donnison St and the railway line. However, the proposal also includes rezoning that would “shift” the commercial core of Gosford closer to the waterfront.

“To encourage applicants applying for additional floor space to act on their development approval, it is proposed to limit the application of the clause to two years and limit development consents to two years,” a report to the Tuesday, August 25 ordinary meeting of Gosford Council said.

The proposal will permit an additional 150,000 square metres of gross floor area in Gosford City Centre on land zoned B3 Commercial Core. It gives developers the ability to exceed height of building and floor space ratio provided they remain within stated restrictions in terms of street frontage and land area, for instance.

Height and floor space ratios can also be exceeded if the consent authority is satisfied that the cumulative total of gross floor space within the B3 Commercial Core zone above the maximum floor space permitted by the Gosford LEP 2014 won’t exceed 150,000 square metres in total.

The consent authority will also need to be convinced of the development’s design excellence, including landscape, interior, construction and historic preservation. The proposal also requires that no adverse relationship is created between the development and any others in relation to overshadowing, privacy, setbacks and visual amenity.

The current 30 per cent bonus clause in height and floor space would cease to apply after April 2, 2016 and would be replaced with the new incentive clause. “Whilst some development has occurred in response to the Masterplan, this has mainly occurred in smaller scale residential development on the periphery of the city centre.

“Development in the Commercial Core and revitalisation of the city centre has been slower to eventuate. “Widespread investment is needed in residential and commercial buildings throughout the commercial core if it is to attain the critical mass to become self-sustaining.

“At this stage of revitalisation of the centre, early developers face higher commercial risks than investors who follow in the medium term, after investment confidence has been established by the economic success of the ‘early movers’.”

By allowing exceptions to development requirements, the developer is given a “value uplift” that makes developing in the B3 Commercial Core more attractive. This item was due for discussion at the general meeting of Gosford Council on Tuesday, August 25.

An adoption of the recommendation would result in commencement of a planning proposal to rezone identified properties in accordance with the report.