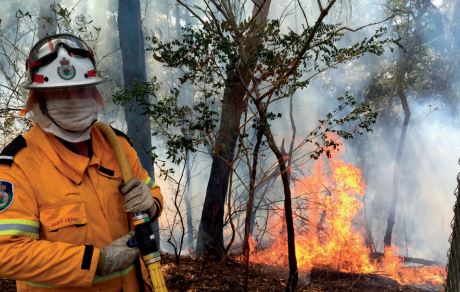 “With weather conditions just right to conduct controlled burning, residents on the Central Coast can expect to see quite a bit of smoke in the air over coming days,” said inspector Rolf Poole from Gosford District RFS prior to the hazard reduction burns which ran from Friday, August 21 to Sunday, August 23.

“This is all part of the District Fuel Management Program,” Ins Poole said. “With controlled burns being conducted at Spencer, Umina Heights, Rumbalara Reserve and Mangrove Mountain, amongst others, smoke impacted on many surrounding suburbs and was be visible from a long distance,” he said.

Following the hazard reduction burns, Insp Poole said the controlled burns “went very well from all accounts”. “All burns were prescribed burn plans and they all went within their prescription with flame light and intensity and with removing the bushfire fuel,” Insp Poole said.

“For Spencer, we had 80 fire fighters and then at Umina, we had 70 fire fighters over two days.” The Umina Heights hazard reduction plan was located north of Patonga Dve, west of Neera Rd and south west of Castle Ct.

“Conducting a low-to moderate fire intensity burn removes the leaf litter off the ground and also a layer below the shrub layer of vegetation. “We remove all that fuel that burns very effectively during a wild fire.

“We have taken out a few rungs of a ladder and that reduces the impact and slows up the fire to give us time to put fire fighters into place. “The fire intensity would be so much greater without the hazard reduction”.

According to Insp Poole, the hazard reduction in the Umina area has “offered significant protection for the next five years for up to 600 homes.”

The Rumbalara Reserve burn was a “strategic burn at the top of the ridge at Rumbalara around communication assets and power too.

“It was to create safety for infrastructure and visitors to the look out. “There is only one road in and one out, so there is now a refuge for visitors and we can now compartmentalise the reserve and use parts for strategic defence.”

Mangrove Mountain Country Fair has something for everyone