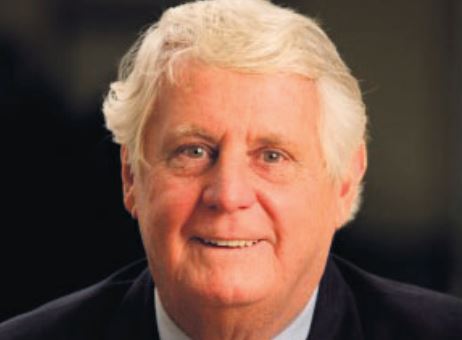 Gosford deputy mayor, Cr Jim Macfadyen has been re-elected to the position of NSW president of the powerful Electrical Trades Union but he doesn’t expect to remain deputy mayor after September 28.

“McKinna will most probably stand as mayor and get elected I think,” Cr Macfadyen said. “I think he has most probably got the numbers to get elected and if I was to make a prediction, I would think Craig Doyle would be deputy mayor,” he said.

Cr Macfadyen, a committed trade unionist and life-long ETU member, was first elected as NSW president of the union in 1999, serving its 22,000 NSW members ever since.

“I am humbled and honoured to have been reelected,” Cr Macfadyen said following confi rmation of the ballot result by the Australian Electoral Commission.

“I first joined the ETU as an electrician with the Water Board in 1964, becoming a delegate with Sydney Water in 1986, and during that time I saw an incredible amount of change, not all of which was for the better.

“Since becoming president of the union I have been involved in some memorable campaigns, including the Your Rights at Work campaign which put an end to the Howard Government’s WorkChoices laws and more recently the Stop the Sell Off campaign to save the NSW electricity network from privatisation.

“While we don’t always win, I know it is right to stand up and fight for what you believe in because if organisations such as unions are not there to fight for workers and the community, the government of the day is never held accountable.

“Over the past 16 years as president, I have stood with ETU members through good times and bad, but the last few years have proven to be particularly challenging for the state’s power workers.

“What concerns me most is that the NSW Government has already slashed more than 2,000 power worker jobs from across NSW and they are planning to cut a further 2,750 jobs before the end of the year.”

“My message to local people is that if the Baird Government implements their next round of electricity job cuts, up to 100 of which are believed to be from the Central Coast, they will see the impact on our local economy, as well as slower response times when we next have a blackout.”

In commenting on his role as a local councillor, Cr Mcfadyen said he had not voted in favour of a restructure of Council staff.

“I never supported the resolution about the restructure, Vicki [Scott], myself and Hillary [Morris] never supported it because I could see a lot of position changes and we would lose a lot of knowledge and experience,” he said.

Cr Macfadyen said the biggest challenge facing Gosford Council is to rejuvenate the Gosford CBD. “We’ve got to make sure there will be cranes in Gosford City early next year.

“If there is redevelopment in the city, people will move back to the city and we will create jobs.” He said the ETU will be involved on the Coast in the campaign to keep weekend penalty rates.

All invited to participate in International Women’s Day march