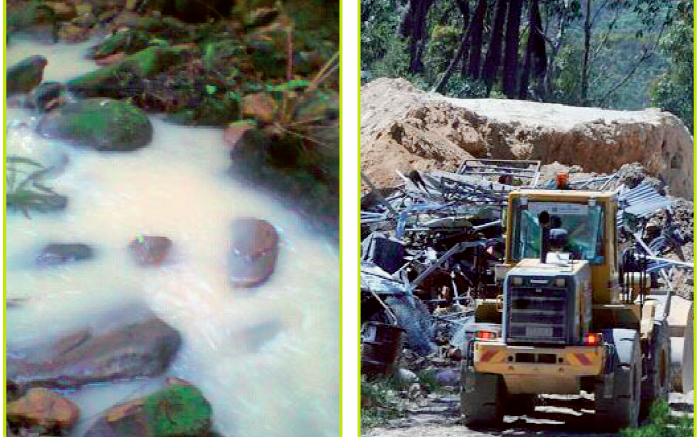 The Mountain Districts Association has called on the NSW minister for environment and heritage, Mr Mark Speakman to take a closer look at the current operations of the Mangrove Mountain Landfill. Association president, Ms Elaine Raines and other residents met with a representative of the minister and with Mr Steve Beaman, the EPA’s director of water and waste on Tuesday, September 7 to discuss a recent sediment discharge from the landfill. The NSW EPA confirmed on Friday, September 4 that sediment-laden water had discharged from the Mangrove Mountain Landfill and entered a tributary of Hallards Creek which flows into Ourimbah Creek.

Evidence of the discharge was provided to the EPA by staff from both Wyong and Gosford Councils and from local residents on Friday, August 21. A statement from the EPA said the authority’s officers inspected the Mangrove Mountain Landfill on August 21 “and observed a sediment trail leaving the premises. “The EPA is monitoring the situation to ensure that no further discharges occur,” the EPA statement said. “Investigators have interviewed the landfi ll operator and are continuing to gather information to determine if any offences have occurred.”

Gosford Council is responsible for issues in relation to the dumping of clean fi ll to be used to build an improved golf course at the Mountain. Ourimbah Creek resident and scientist, Ms Pam O’Sullivan said she fi rst noticed the discolouration in Ourimbah Creek at the beginning of August and made reports to Wyong Council and the EPA. “We have neighbours whose family have been in the valley for generations and they said they had never seen anything like it,” Ms O’Sullivan said. “The water was opaque, a whitey grey, tinged with green, not like if we usually get sediment coming into the creek because of a storm when it is a coffee colour. According to Ms O’Sullivan and other residents who have walked from Ourimbah Creek to its junction with Hallards Creek and to the point where it meets the boundary fence of the landfill, the sediment laden water may have been pumped from the landfill over a rise to end up in Hallards Creek.

The volume of water that escaped from the site into Hallards Creek and Ourimbah Creek is also unknown, but residents believe it must have been substantial to impact so far down stream. “Anyone who walked through the very dense bush along the creeks would have seen the grip lock landfill fence line going out into the national park. “We saw pipes on the landfi ll side of the fence, up to the fence, rubble at the base of the fence … silt on the ground, the native grasses have died and have been fl attended, native shrubs are dead and dying.” Ms O’Sullivan, who has a Bachelor of Science and has done water watch testing programs, said she did a sweep for macro invertebrates in Hallards Creek and found no sign of life.

“I did one in Stringy Bark Creek and it was teaming with life,” she said. “I didn’t think the Hallards Creek reading could be right so I traipsed all the way up again yesterday [Monday, September 7] and for 100 metres up Hallards Creek, I did repeated sweeps and within the water column itself, and I found not one single macro invertebrate. “To me that is indicating that Hallards Creek is dead. “I notified Steve Beaman and he said he will get it surveyed by NSW Environment and Heritage,” she said. Ms O’Sullivan said she has been assured by Wyong Council that the water was not contaminated with any heavy metals or other dangerous chemicals but her concerns about the impact of the landfill on local waterways and the Central Coast water supply remain strong.

She has neighbours who use Ourimbah Creek for everything, from irrigating their paddocks to bathing. Likewise, she asked the EPA to take leaf and tissue samples of the dead and dying vegetation along the creek and in the bush near the landfill’s boundary fence. “Something has happened to the vegetation that is killing it. “It could be water logging but it doesn’t seem right to me because some of those native plants are very sensitive to changes in soil chemistry. “We asked the EPA to do an analysis of sediment lying on the ground up there. “I am dumbfounded that if the EPA is investigating a suspected serious breach, why hasn’t it checked the biota in the water to see if it has been affected. “Why didn’t it check the dead and dying vegetation? “Why didn’t it take a sample of sediment to analyse? “Any scientist looking at the site would have said there has been an event here, what has changed?

“Whether it is this site or any other site, I am so disillusioned and disgusted at the EPA and their casual off hand way of treating serious events. “This is our water supply. “I can’t believe that Hallards Creek, which should be relatively pristine, is dead and even now it still has sediment in the bottom of it. “Stringy Bark Creek is clean, the water is so clean it almost hits you in the eye, and we’ve still got a level of turbidity coming out of Hallards Creek,” she said. The EPA has not yet issued new licensing requirements for Mangrove Mountain Landfi ll so no tipping of waste is currently permitted on site. However, Mangrove Mountain residents have reported covered trucks entering and departing from Hallards Rd, which may indicate dumping is taking place without the license being fi nalised.

Gosford Council CEO, Mr Paul Anderson said he could not comment on whether or not trucks were currently entering or leaving the site but said it was a matter the EPA was currently looking into. Cells have to be lined and approved by the EPA before the site can take waste. Elaine Raines said she does not believe a development application of the type that has permitted the Mangrove Mountain Landfill to operate would be allowed under Gosford Council’s current Local Environment Plan (LEP). “The consent orders issued by the Land and Environment Court in August 2014 were actually very vanilla documents and mean nothing. “Council issued a press release that says everyone will be happy because we are going to get a golf course and clean fi ll only, but it was very misleading. “For 10 years there has been an outcry over this landfi ll and when I got the consent orders and press release, I was very concerned,” she said.

According to Ms Raines, the nitty gritty of how the landfill site will be controlled by any new EPA licence will be set out in a Leachate Management Plan and an Environment Management Plan, both of which were referred to in the Land and Environment Court consent orders and are yet to be finalised. “The community is still saying it was a good outcome and Gosford Council has successfully negotiated itself out of the equation; they say they can’t stop the development because it is the subject of court orders and controlled by the EPA.”

She said she is aware of letters from Gosford Council asking the EPA to stop the dump because of the threat it posed to the local water supply. According to Ms Raines, the new license will permit Mangrove Mountain Landfill to dump an additional 1.34 million cubic metres of yet to be specifi ed waste plus clean fi ll for the golf course. She said based on levies charged by the EPA, she has calculated that the regulator stands to make $160 million in fees from the landfill site. “We don’t want an extra 1.34 million cubic metres of waste coming to the mountains.

“We don’t think landfi ll in any form is an appropriate development on this aquifer. “A lot of the rubbish put there is illegal dumping because it is outside the licence conditions and yet there hasn’t been any punishment at all.” Ms Raines said she believes the landfill operator “will be beaten with a feather” over the latest sediment discharge into Hallards and Ourimbah Creek. “We want the environment minister to intervene. “Everyone’s saying we can’t do anything about it, but someone has given a 1.34 million cubic metre licence for waste to go into a water catchment area. “Even the EPA has told us that they may be in contempt of court if they don’t issue the licence.”