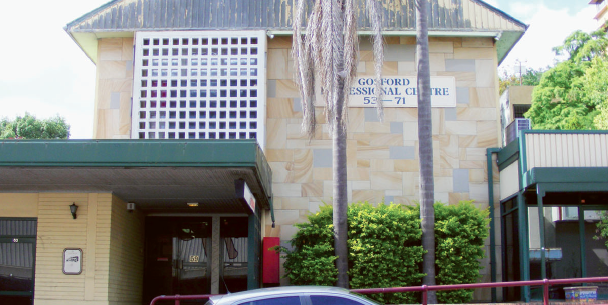 The favoured site for the new library.

The former Caddy Club site adjacent to Gosford Council administration offices on Mann St was recommended as the preferred site for the new Gosford City library including the Gosford 50+ centre and smart work hub. A report to the ordinary council meeting on Tuesday, September 8 also recommended an investigation of the opportunities for a youth space within the new library complex to create a community hub.

Gosford Council’s manager of property and economic development has provided advice on a ‘high level starting point’ for what might be built on the Caddy Club site to ensure the overall development potential of the site is maximised. The building proposed for the site would provide fi ve levels of 1,500 to 1,550 square metres each plus parking. The design includes a ground fl oor café area and integration of the street frontage with that of Council’s. “This footprint would likely deliver, at the recommended library size of 4,500 square metres, a three level library. “The current 50+ Centre is roughly 820 square metres and the Smart Work Hub is just under 400 square metres, These could be expanded to say 1,000 square metres and 500 square metres respectively and occupy the fourth fl oor.” Another floor could be for educational or similar purposes, the report said.

If Council built five levels for the library, current zoning appears to allow the construction of a 5,000 square metre residential tower behind, delivering 35 to 40 apartments. According to the report, financing for the project would come from annual fees received from the State Library for the provision of library services (around $400,000 per year), the $8.1 million from the Special Rate that was introduced in 1997-98 as part of the financial strategy to provide for a new regional library and the $7 million it expects to receive from the Department of Infrastructure and Regional Development as part of the Kibbleplex learning and enterprise centre’s application to Regional Development Australia Fund. The State Library investigated eight options including six CBD locations, a do nothing option and a no central library option.

The Caddy Club site was in the running as a potential site for the Australian Taxation Office (ATO) building in the Gosford CBD but once it was ruled out by the ATO, it became the State Library’s preferred site. The proposed building was originally designed for the ATO in council’s submission in their expression of interest. Earlier this year, the State Library was asked to evaluate the suitability of an additional site, that of the old Gosford Primary School. As a result, the State Library recommended colocating the City Library with the proposed Performing Arts and Conference Centre along with the Smart Work Hub and Gosford 50+ Centre. However, the school site was not in Gosford Council’s ownership and now appears to be the preferred location for the Australian Taxation Offi ce purpose built centre of excellence in Gosford. The ground floor of the Kibbleplex building was rated third and a rebuild of the Parkside site was rated fourth.