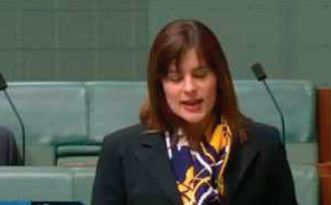 Member for Robertson, Ms Lucy Wicks MP has declared herself “in” as a Central Coast Mariners member for Season 11 of the A-League in 2015-16.

“The Central Coast community is passionate about sport and in Gosford we have the home ground of a club that has so much to be proud of in its short history,” Ms Wicks said in federal parliament recently.

“The Central Coast Mariners are entering their 11th season in the A-League, and boast a proud record including a Championship Trophy,” she said. “But of course the true heartbeat of the club is its supporters, with more than 6,000 members, including the Yellow Army.

“This year the Mariners are asking ‘Are You In?’ “And I’m proud to say that yes, I’m in for season 11. “I’m in because it’s all about standing up for the Coast, and our great community.

“Because it’s not just about the Central Coast Mariners, but also the 10 football clubs in my electorate, who you’ll see at parks and ovals across the Coast every weekend.” Ms Wicks named all 10 clubs in the Robertson electorate.

“It’s also great to see the Mariners engage with these young stars of the future by attending training sessions, inviting them to play on the field at half time and by committing to play more games next season at Central Coast Stadium,” she said.

“So I’m supporting Mariners and our local football clubs because I’m passionate about our community, and proudly wear my yellow and navy in parliament,” she said.