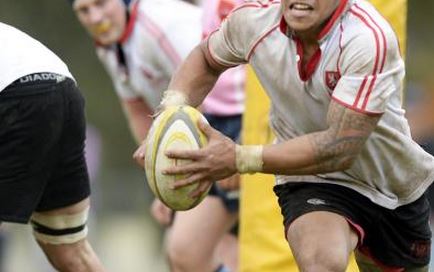 The Match of the Day in round 15 of the Central Coast Rugby Union saw Avoca Beach score a quite convincing win over Gosford at Heazlett Park, running out winners by 39 points to 10.

The Saturday, August 8 win sees Avoca Beach leapfrog Gosford into third spot on the competition ladder in what is developing into one of the closest races to the semi-finals in many years. After a fairly even start to the match, where both teams had periods of attack and then long periods of defence, the scores did remain tight early on.

By the midway point of the first half, the home side was already beginning to show its dominance, both at the set pieces and in general play. At the 30th minute, Avoca Beach had jumped to a 22 points to 10 lead and that score line remained the same until the halftime break.

Avoca Beach continued to control things into the second half. Avoca Beach simply had the far greater desire to win this match, and on the other hand, Gosford seemed to be very flat. The further the match went on, it was obvious the home side had scored suffi cient points for victory, while Gosford was unable to break through.

Avoca Beach had several very good performers on the day. Fullback Nathan Brown had a great day, crossing for three individual tries. He was well supported by outside centre Matt Anderson, who crossed for two tries, and forward Emile Thomas, who never fails to put in 100 per cent effort.

It was an excellent win for Avoca Beach and one that will prove so important in the race to the fi nals. It just was not Gosford’s day. Despite this, Josh Reid played well, and he was rewarded with a try, while Centre Josh McGlynn was very effi cient in the centres.

Woy Woy scored an excellent win over Terrigal at Ettalong Oval, winning by 37 points to 10. After a very tight fi rst half, it was Woy Woy that got stronger and stronger and dominated the latter stages of the match. The win itself may not have been a surprise, but the size of the win was.

Terrigal had played great rugby the week before when they defeated Gosford, so many would have expected them to put in another dominant performance in this match,.but Woy Woy were too strong on the day. There was nothing in the first half.

Woy Woy went to the halftime break leading by the single point, by eight points to seven. It was a somewhat scrappy fi rst half with play never rising to any great heights. Woy Woy grabbed the lead in the match just prior to halftime when they took an intercept and raced in for the try and the lead in the match.

Terrigal had several players who gave it their all. None was better than forward Sam Kenny, while winger Dan Sargeant had another good match, as did lock Phil Heard. The second half saw Terrigal limited to one penalty goal while the home side were able to go on and post a further 29 points.

It was a great second half by the home side, and the victory proved that Woy Woy do not want to lose that Premiership they currently hold. The win sees Woy Woy join Gosford in equal fourth spot in what is proving a gripping race to the Finals.

Christmas carols make their way back to Central Coast Stadium