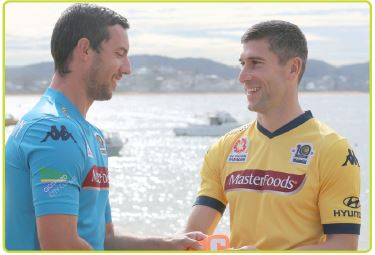 John Hutchinson hands over the captain's armband to Nick Montgomery

John Hutchinson hands over the captain’s armband to Nick Montgomery

The Central Coast Mariners have confirmed that Nick Montgomery has been named club captain for the Hyundai A-League 2015/16 campaign and is faced with a unique first test as skipper on Saturday, May 23.

In a unique sequence of events, ‘Monty’ is now faced with the challenge of facing off against Hutch in his testimonial match on Saturday, May 23.

The match will see a host of Mariners legends return to the Central Coast to take on Montgomery and his Mariners.

Montgomery arrived on the Central Coast in the lead up to the 2012/13 Championship winning season and has been a mainstay in the centre of the park since joining the club from Sheffield United.

The 33-year-old made over 300 appearances for ‘The Blades’, including a season in the English Premier League.

After becoming a Club Legend at Sheffield United, ‘Monty’ arrived on the Central Coast to link with the Mariners and has made 72 Hyundai A-League appearances for the yellow and navy.

“It’s a great honour to be named Captain, coming here, Hutch took me in and has looked after me the last couple of years and I’ve got some massive boots to fill,” Montgomery said.

“I’ve been here for three years now, I’ve lived and breathed the culture of this club and Hutch has been a great leader.

“Taking the man [Hutchinson] down, that’s what I’ll be trying to do this weekend so that will be fun.

“I’ve played with him for three years but it will be nice to play against him on Saturday.

“Hopefully I can give the armband the credit it deserves,” Montgomery said.

Hutchinson noted Montgomery as the ideal man to lead the Mariners into battle next season.

“For me it’s the best choice,” Hutchinson said.

“First and foremost he’s a family man and a great leader in the change room.

“You could see when he first came in, you could see how much experience and leadership he brought to the club, he fitted in well with the team culture and the biggest part about Monty is that he’s a team player.

“Nothing’s above him and as a captain you’ve got to give everything and that’s what Monty’s about.

“He’s a great man and he’s the best man for the job,” Hutchinson said.

“If you’re looking for a player to lead by example, Monty is it,” Walmsley said.

“His work ethic is well known, he’s been captain before at a very big club so he understands the responsibility that goes with it,” he said.

“Monty is a humble guy, a very hard working guy.

“He comes from the north of England and he’s had to work incredibly hard, so he carries that with him.

“Because of the character that he is, he demands the same of everyone around him,” Walmsley said.