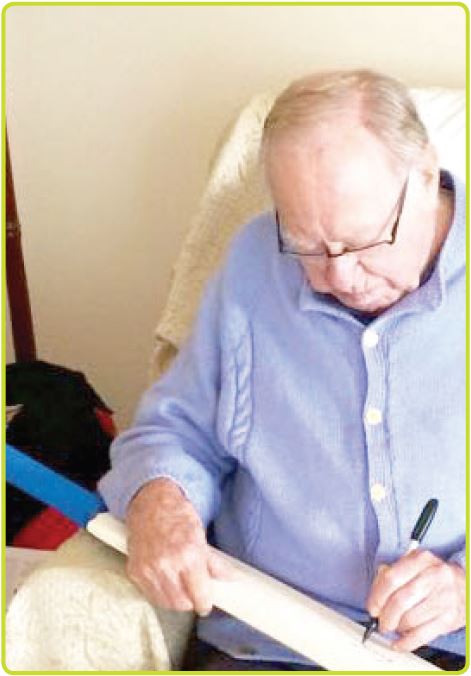 Terrigal Glen Retirement Village resident Mr Arthur Morris, one of the two living members of Sir Don Bradman’s Invincibles, will be the guest of honour at the village’s charity auction on Friday, March 20.

The event will include a morning tea, an autograph signing by Mr Morris, and the auctioning off of valuable cricketing memorabilia. Mr Morris has signed a new NSW Sheffi eld Shield bat, a limited edition copy of ‘100 Tests’, and the scorecards from his First Class Centuries, which he earned during each of the innings of his debut test. These items, along with the Sheffi eld Shield bat signed by the current 2014-2015 squad, donated by Cricket NSW and the Sydney Cricket and Sports Ground Trust, will be auctioned off. One of the day’s guests is also set to receive four tickets to next year’s One Day International between Australia and India, which will be drawn as a lucky draw prize. Proceeds from the auction will go to Mr Morris’ chosen charity, The Primary Club of Australia, which funds sporting and recreational facilities for people with disabilities. The Primary Club of Australia charity development manager Mr Geoff Vecro said: “We’ve raised over $5 million over 40 years of operation.” “It’s all about cricketers playing the game and giving something back.” Mr Morris has been an active supporter of the club since being made an honorary vice president over 30 years ago. “It’s a wonderful cause and I’m glad to be involved,” said Mr Morris. The event will run as part of Seniors’ Week, a state wide celebration of older Australians, which runs until Sunday, March 22. Tarragal Glen Village manager Ms Kylie Basford said Seniors’ Week is a great tradition that seems to be getting bigger and bigger every year. The morning tea will aim to raise awareness and celebrate Australian seniors, together with dozens of concerts, fi lm festivals and events held across NSW throughout the week. Along with the live auction, the event will feature several stalls and a performance by women’s singing group Costal a Cappella, whose repertoire includes music spanning from the 1920s to the 1970s. “It is going to be a great day”, said Ms Basford.