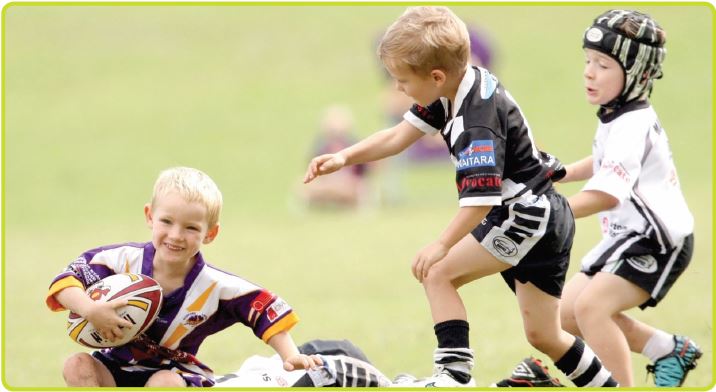 The Gosford and Asquith U6s enjoying their first ever game of Saturday rugby league. Archive image 2015

The Gosford Kariong Rugby League Club has been back in full training for a month as kick off to the 2015 junior rugby league season approaches.

The Storm conducted its first set of trials on the second Saturday of March; playing a series of successful matches against the Asquith Magpies in warm and humid conditions at Narara Valley High School.

With players ranging from U15s down to U6s, the day’s fulsome program offered many their first real taste of rugby league.

The opening match of the morning featured the U6s in a game that was filled with laughter. The youngsters took great glee in running any which way, as a giant game of chaseys ensued.

The respective coaches and parents attempted to point their young chargers toward the appropriate try line however a game of football was never going to be a match for a paddock full of kindergartners running free.

The following weekend saw the Storm teams travel down to Harbord on the northern beaches strip of Sydney to further fine tune their combinations against the local Harbord United Devils Club.

The season does not commence until Saturday, April 18.

Coast is not CSG free until PEL2 is cancelled

Avoca Beachside Markets to be Held

Woman assaulted on a train