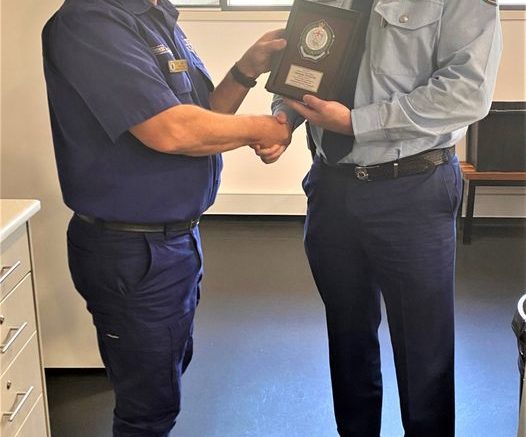 Scene of Crime Officer, Chris Tockuss, has been presented with a service plaque during a special ceremony at Wyong Police Station.

Northern Region Commander, Assistant Commissioner Peter McKenna, made the presentation for 21 years of service in the NSW Police Force.

It was part of Tockuss’s retirement farewell attended by many of his colleagues in Tuggerah Lakes Police District together with Commander of Tuggerah Lakes District Detective Superintendent Chad Gillies, Inspector Kylie Phillips and Senior Sergeant Terry Flippence.

“Chris has given great service to the NSW Police Force and the communities of the Central Coast for the past 21 years,” Det Supt Chad Gillies said.

“As a Scene of Crime Officer, Chris has assisted in many investigations and clear-ups of volume crime by applying his expertise to forensically examining crime scenes and exhibits.”