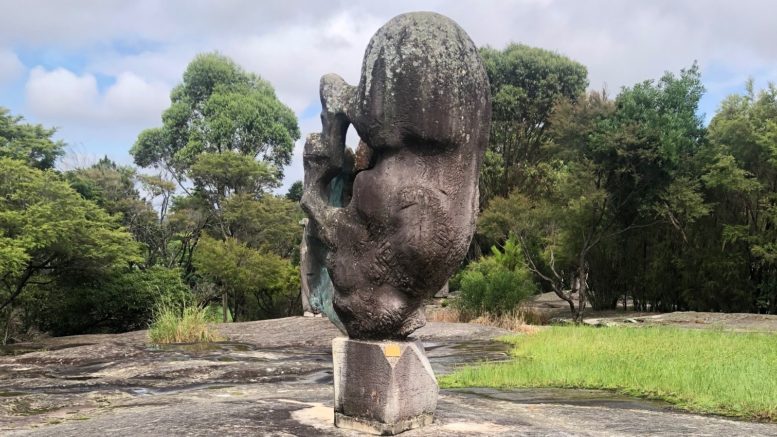 One of the Wondabyne sculptures

One of the Central Coast’s best kept secrets, the Wondabyne sculptures, is now taking pride of place at Kariong, with information signage having been recently completed.

Some of the carved pieces, developed at the sculpture symposiums held in the late 1980s, were formed on the shores of the Hawkesbury River at Wondabyne.

These now reside within the Mt Penang Gardens.

A second group of sculptures was carved on site within the Mt Penang Parklands.

In 1987, a group of international sculptors, led by Australian artists Lawrence Beck and Bruce Copping, united to respond to the rapid emergence of globalisation and its negative effects on traditional cultures, spirituality and the environment.

With works designed and carved on site from sandstone from Gosford Quarries, the first symposium at Wondabyne was a joint initiative by Beck, the State Rail Authority and the then Gosford Council.

Train travellers to and from the Central Coast were able to view the work from the train as it passed through.

In 2003, for reasons of public safety RailCorp decided to remove the sculptures.

Railcorp engaged sculptor Copping as a consultant to choose a new site.

After several alternatives were considered, the present site was chosen with the approval of RailCorp and what was then the Festival Development Corporation.

In 1988, a second symposium was organised, again involving Lawrence Beck, and sandstone pieces from Gosford Quarries were delivered and carved on site in Mount Penang.

Internationally recognised sculptors from as far afield as Myanmar (then known as Burma) and Georgia (then in the USSR) took part.

The more remote location of the second sculpture site, Sandstone Ridge in the northern section of Mount Penang, creates a setting where the sculptures are in harmony with the natural landscape.

These are especially evocative when there has been rain and the rockface and sculptures seem to take on an energy of their own.

“People without their dreaming are lost,” Beck said.

“The dreaming is a parallel time to everyday time, but timeless.

“A sculpture is a passage into the dreaming.”

The symposium 1 sculptures within the Mt Penang Gardens are accessible via a pathway that winds through the gardens, with information signage installed at the base of each piece, a joint initiative of Rotary Clubs on the Central Coast, Art on the Hill, Central Coast Council and the Hunter Central Coast Regional Development Corporation.

More recently information signage has been completed for the symposium 2 sculptures in the northeast of the Parklands.

Following discussions with State Member for Gosford, Liesl Tesch, a successful application by the Rotary Club of Erina for a NSW Government Community Building Partnership grant was completed.

Working within guidelines from Heritage NSW and Central Coast Council, and with the support of the Hunter and Central Coast Regional Development Corporation, site sensitive signage with information on the sculptures and artists has been installed.

A larger information board that details the history of the site and includes a photograph taken of the sculptors on the site before they started working has also been installed.

Recognition of the site’s long and sometimes challenging history as a juvenile detention centre (established in 1912) was also acknowledged with a black cockatoo story and extensive bush regeneration work, clearing the area of invasive non-indigenous plants and weeds as a way of respect for the land and site.

The dedication and commitment of Annona Pearse and Maya Weekes over eight years gave voice to the sculptors, the sculptures, the boys and the sacredness of the works and sites.

The sculptures are now significant cultural pieces and an asset to the Central Coast.