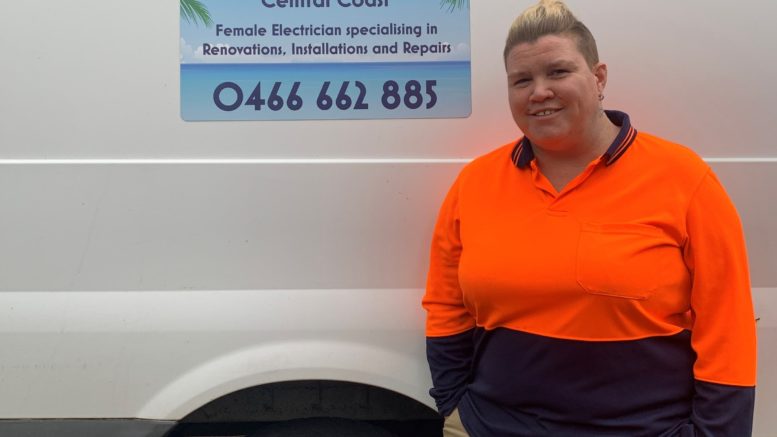 Lauren Conway has started her own business

As more women choose to enter the trades field, the State Government is making their path a little smoother with fee-free and low-fee apprenticeships and traineeships, including Built for Women – a program designed to boost female participation.

Minister for Skills and Training, Alister Henskens, said the Government wanted to make it easier for women to access the skills they need for a first job, a new job, or a better job.

“The NSW Government’s infrastructure investment is providing great opportunities for women to pick up the tools and enter a dynamic and rewarding industry,” he said.

Single mother of two, Lauren Conway of Wamberal, recently qualified as an electrician at the age of 38.

“I always wanted to get into a trade but was steered away from it when I was younger,” Conway said.

“There weren’t a lot of women in the trades – we were encouraged to go to university and pursue a career such as teaching.”

Conway did various jobs for several years and after staying at home to raise her children, decided to chase her original passion.

“I was bored with everything else – I wanted to do something with my hands and decided electrics was for me.”

Enrolling in a Certificate in Electrotechnology course at TAFE Wyong, Conway said although it was “weird” being in a class with 17-year-old boys, she found she loved the field and after four years of study, achieved her qualification.

“I have set up my own business and am working as a sub-contractor for builders and other electrical businesses,” she said.

“I would absolutely recommend that other women get involved in a trade.

“Our numbers are growing but even so, we’re still vastly outnumbered … I was recently on a job site with 300 tradies and only four of us were women.”

Conway acts as a mentor to younger female friends wanting to get into fields such as carpentry and electrics.

“They come to me because I have a bit more life experience,” she said.

Conway said she had encountered very little gender bias on the job – and that is mostly from older tradesmen as she works at various residential locations around the Central Coast.

Recently released data from the National Centre for Vocational Education and Research shows that female apprentice and trainee numbers are booming across the state, with a 91 per cent surge in commencements in the year to September, 2021.

Minister for Women, Bronnie Taylor, said the Built for Women program has supported close to 5,000 free training places for women in trade-related work, including construction, manufacturing, engineering, transport and logistics.

“Greater diversity makes our workplaces stronger and a secure and fulfilling future awaits women who choose a career in trades,” she said.

Full details of courses available are at https://education.nsw.gov.au/skills-nsw/skills-initiatives/built-for-women.