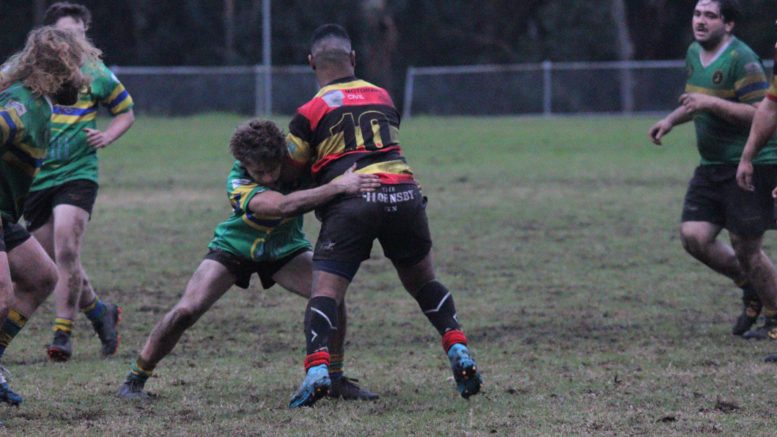 Tyler Staben made his 1st Grade debut for Avoca Beach

Avoca Beach advanced to the second spot on the points score tally after an important 24-5 victory over Hornsby on July 16 in the Central Coast Rugby Union competition.

The match was played in very heavy conditions with both teams struggling to get their rhythm in the first half.

Damp conditions underfoot saw the teams go to the halftime break at 5 all.

In a tight game transferred to Ettalong Oval, Terrigal downed The Lakes 31-24 to regain top spot on the ladder.

Terrigal got away to a great start and within the opening few minutes had jumped to a 14-0 lead with two tries to flanker Noah Hughes.

The Lakes hit back with their own tries, and by midway through the first half had even taken the lead in the match.

A late penalty goal to Terrigal saw the two teams go into the halftime break locked at 17 points apiece.

Terrigal crossed for two tries to jump to a very handy 31-17 lead midway through the second half.

Although The Lakes crossed for a late converted try it was not enough for the victory.

The match of the day saw Kariong travel to Woongarah Oval to take on home team Warnervale.

Previously at the top of the ladder, Kariong had a tough day and was defeated by Warnervale 28-20, slipping to equal third spot on the points tally.

Warnervale got away to a great start and controlled proceedings in the early stages of the match, kicking a penalty goal before crossing for two tries.

Warnervale went to the halftime break leading by 18-3.

Kariong hit its straps early in the second half and managed to take the score to 18-15 but Warnervale scored another converted try and held onto the lead despite a late converted try for Kariong.

The best players for Warnervale were No.8 Tevita Piukala, lock Lachlan Natapu and centre Sione Piukala, who crossed for two individual tries.

It was an essential win for Warnervale, now sitting in equal fifth position.

The best players for Kariong were centre Kane Williams, five-eight Josh McGlynn, and No.8 Logan Campbell.

The Razorbacks versus Gosford clash was moved to Joseph Banks Oval due to the condition of Ourimbah Rugby Park and was completely dominated by the Razorbacks, who ran out winners by 73-10.

The Razorbacks led by 42-5 at the halftime break and the match was tightly secured even at that stage.

Gosford continued to give its best but the Razorbacks posted a further 31 points in the second half to continue on for the comfortable win.

The Razorbacks crossed for 11 tries in the match with lock Josefa Biu crossing for three individual tries.

Best players for the Razorbacks were flanker James Blanch, centre Jarrod Grange, who was able to post a total of 23 points, centre Owen Turner and prop Brett Cunningham.

The Premier 1 points table sees Terrigal in the lead on 41, with Avoca Beach on 40 and the Razorbacks and Kariong tied in the third spot at 37.

On Friday night, July 15, The Bay lost its President’s Cup clash with Woy Woy by 29-7 in what proved a tough tussle.

Women’s 10’s rugby saw wins recorded by Terrigal, Warnervale and Avoca Beach, seeing Terrigal and Avoca Beach locked in a tight struggle at the top of the competition ladder.